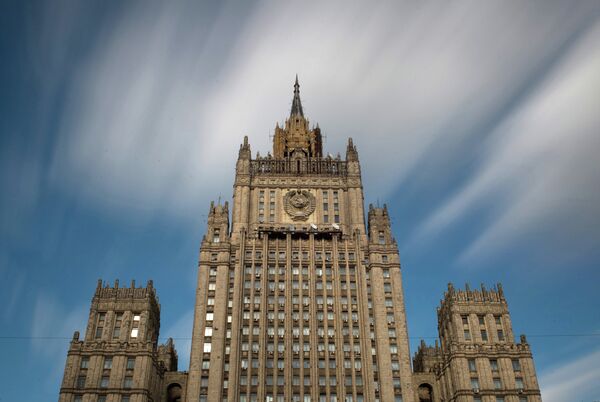 Moscow rejects the recent «unfounded public accusations», made by the United States over Ukraine and regrets that Washington continues to intesify tensions in bilateral relations, the Russian Foreign Ministry said in a statement on Friday.

MOSCOW, July 25 (RIA Novosti) — Moscow rejects the recent «unfounded public accusations», made by the United States over Ukraine and regrets that Washington continues to intesify tensions in bilateral relations, the Russian Foreign Ministry said in a statement on Friday.

"We regret that the US continues to fuel tensions in Russian-Ukrainian relations, and the Department of State representatives are engrossed in anti-Russian propaganda," the statement says.

On Thursday, a spokesperson of US Department of State, Marie Harf accused Russia of cross-border artillery attacks on Ukraine and of plans to supply air defense systems to eastern Ukrainian independence supporters.

"She cited some kind of «evidence» that the US allegedly has. However, it was not made public. No wonder, because facts to prove these false accusations simply do not exist," the Russian Foreign Ministry said adding that all the statements recently made by Harf are nothing but anti-Russian clichés, which Washington persistently tries to thrust on the international community.

According to the ministry, the aim of this anti-Russian rhetoric is to cover up the true reasons of the ongoing Ukrainian conflict, for which the US government shares the blame.

Since the beginning of the crisis in Ukraine, the United States has been blaming Russia for instigating tensions in the country, even though Moscow repeatedly denied any involvement in Ukraine’s internal affairs.

Following the crash of Malaysia Airlines Boeing 777 near Donetsk last week, the West speculated the conditions of the incident, saying that it had been created by Russia as it allegedly supplied independence supporters in Ukraine’s east with weapons.

Ukrainian authorities claim the plane was shot down by independence supporters, whereas the latter say they do not have the necessary equipment to hit a target flying this high.