Flight MH17 is Trump Card in US’ Information War with Russia 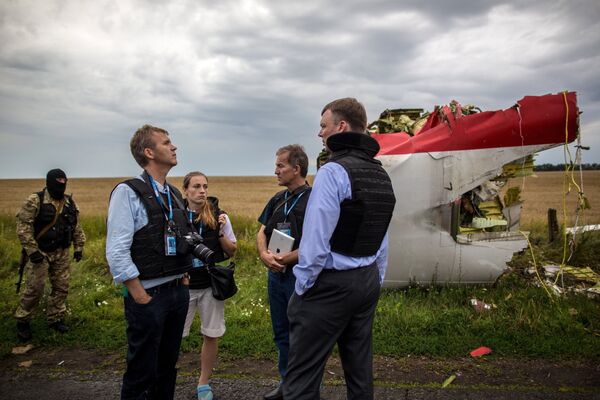 Praising the ruthless military operation by Kiev against both armed rebels and unarmed civilians, American neocons have also been inciting Washington to launch wide-raging economic warfare against Russia in recent months.

Thus, unsurprisingly, when the Ukrainian government released information on the Malaysia Airlines flight MH17 catastrophe, the US media hastened to blame Russia for the tragedy, although no investigation had been carried out.

Immediately after the news of the tragedy had spread abroad, an unprecedented media attack on Russia began. Rod Dreher, a senior editor at The American Conservative, suddenly started threatening Russia, claiming: "If there is any Russian involvement in this crime – then Moscow must be made to pay a heavy price by the international community."

In a pathetic manner he accentuated that if Russia had indeed supplied the Ukrainian rebels with missiles "then the blood of those innocents is on Putin's hands."

The New York Times described the event as if it had obtained compelling evidence of Russia's guilt. It cited US intelligence and the Ukrainian officials, presenting an unverified recording that, as it said, could "prove" the rebels’ participation in downing the Malaysian plane.

Stressing that the aircraft was destroyed by a Russian SA-series missile, The New York Times did not clarify, however, that although such medium-range surface-to-air missile systems have been manufactured in Russia since Soviet times, both the Russian and Ukrainian armies possessed such weaponry. In this light, the media’s notion that "Mr. Putin did not specifically deny that a Russian-made weapon had felled the Malaysian jetliner" looked especially misleading and illogical. The New York Times was inclined to believe that either the Ukrainian rebels or Russian military forces conducted a fatal rocket launch, although "surveillance satellite data <…> showed the final trajectory and impact of the missile but not its point of origin."

International affairs journal National Interest was drawing gloomy historical parallels between the MH17 crash and the beginning of the World War I: "If the horrific downing of a Malaysian airplane over Ukraine was deliberate and carried out either from Russian territory or by separatists, then Russia and the West will move one step closer toward a confrontation that has unsettling echoes of August 1914."

It cited US Senator John McCain who warned Russia of "profound repercussions": "It would open the gates for us assisting, finally, giving the Ukrainians some defensive weapons [and] sanctions that would be imposed as a result of that," noted the old hawk enthusiastically, "That would be the beginning."

Interestingly enough, the media source did not even mention the possibility that the Ukrainian Army could as well be responsible for the catastrophe of Malaysia Airlines flight MH17. The verdict made by Jacob Heilbrunn, National Interest's editor, was that it was the rebels, backed by Russia's government, who shot down the plane either "in order to exacerbate the confrontation with the West" or “by mistake."

Those American political analysts and experts who bemoaned the US' defeat in the information war with Russia several weeks ago, like Ilan Berman, who urged Washington to start large-scale information warfare against Moscow in "Wanted: A Real War Of Ideas With Russia," got a unique opportunity to realize their most daring ideas, when the horrible tragedy occurred.

Was it ethical to use the deaths of hundreds to gain an advantage in the information war? The burden of moral responsibility is on those who unleashed the Russophobic campaign.

It should be noted that The Washington Times demonstrated the most balanced approach to the tragedy. In the article "Shot out of the sky: Jet downing stokes tensions between Ukraine, Russia," Dave Boyer stressed that neither of so-called "intercepted rebels' telephone conversations" presented by the Ukrainian intelligence had been verified as authentic. He added that the weapons the rebels were known to possess actually did not have the capacity to reach beyond 14,750 feet, while the Malaysia Airlines plane was flying at an altitude of 33,000 feet.

Dave Boyer quoted Igor Sutyagin, a research fellow in Russian studies at the Royal United Services Institute, who pointed out that both the Ukrainian and Russian militaries have SA-17 missile systems and denied the possibility "of the transfer of that type of system from Russia [to rebels]."

After a week of attacking Russia with groundless accusations, the US security service officials had to admit that they had not got proof of "direct Russian government involvement in shooting down" the Malaysia Airlines plane. Furthermore, the unnamed US officials suggested that the MH17 airplane could have been shot down in error, adding that they could not state definitively if it was Ukrainian insurgents who launched the missile.

Embarrassingly, while Russia's Defense Ministry presented its radar and satellite data on July 21, describing the final moments of Malaysia Airlines flight MH17 before the crash, US State Department's spokeswoman Marie Harf was referring to YouTube videos and social media posts to prove the Ukrainian rebels' involvement in the tragedy. Alas, all the "evidences," Marie Harf pointed, collapse upon careful scrutiny.

However, the media’s anti-Russian smear campaign has borne its first fruit: the EU is discussing the next round of sanctions; tensions between Russia and the West have increased; leading US Democratic senators called on President Barack Obama to add the Ukrainian rebel group to a US foreign terrorist organizations blacklist.

Remarkably, the American Russophobic lobby achieved these impressive results before an independent international investigation into the plane crash even started. It should be noted that methods used by Western mass media are strikingly similar to those used by savage cannibal tribes: through endless repetition of some words, savages are persuade themselves of the necessity to devour their fellow tribesman.

In mid-July, James W. Carden, former advisor to the US State Department’s US-Russia Bilateral Presidential Commission (2011-2012), pointed to the growing interventionist hysteria that swept neocons and their "counterparts" abroad. He calls them "the Wilsonians." The global Wilsonians are beating the war drum, comparing 2014 with 1938 when the most "demonic" authoritarian regimes were on rise, Carden notes in his article "Will Global Wilsonians Take Us to War?"

"There is, I think it fair to say, <…> very little with which to compare the world of 2014 with that of the 1930s, which brought us the demonic Nazi regime, a lunatic Communist one, and the untold misery of millions of people even prior to the opening shots of the World War II. Yet for the Global Wilsonians it’s always 1938," Carden emphasizes.
Carden asks if those who bolster the Cold War between Russia and the West are interested in turning this confrontation "hot."

It seems the former US adviser is right: it is obvious that the US mass media and its prominent politicians are cynically using a public tragedy to push the West towards dangerous confrontation with Russia.