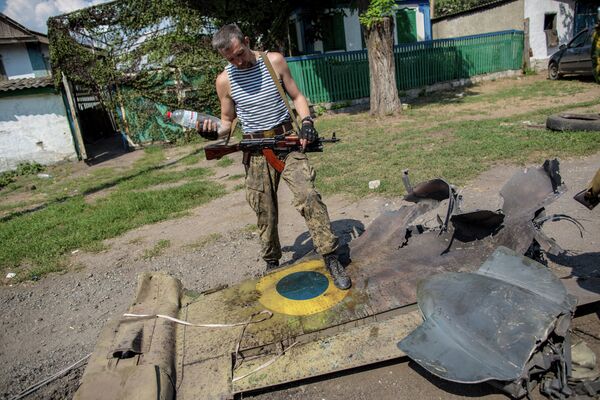 “Two Su-25 jets were downed by MANPADS [man-portable air-defense systems] near [the village of] Dmytrivka” earlier in the day, the prime minister of the self-proclaimed republic Alexander Boroday said. Ukraine’s Defense Ministry made the same report.

Other two Su-25 (NATO reporting name Frogfoot) planes were shot down near Zorynsk and Krasnyi Luch, in Luhansk Region on Tuesday, according to local militia.

“Yesterday, the self-defense forces downed two Su-24 combat jets also known as Grach. It happened near [the city of] Luhansk, the planes crashed near the towns of Zorynsk and Krasnyi Luch. We have no information about the pilots yet,” spokesman of the Luhansk People's Republic Volodymyr Inogorodtsev said.

Kiev authorities launched a special military operation in the east of Ukraine in mid-April in a crackdown on the independence movement. Hundreds of people, including civilians have died in Luhansk and Donetsk regions over the past months.