Russia to Solve Problems Through Dialogue Despite Sanctions, Ultimatums - Putin 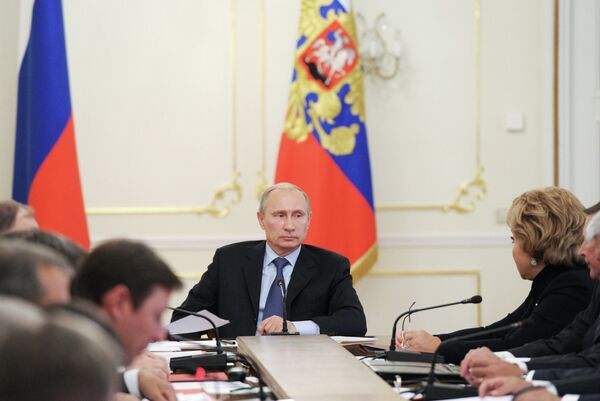 © RIA Novosti . Mikhail Klimentiev
/
Go to the photo bank
Subscribe
Moscow hears the language of sanctions and ultimatums more and more often, however Russia strongly believes that the problems should be solved through dialogue, Russian President Vladimir Putin said Tuesday.

“We hope that our legitimate national interests will be respected and the disputed issues that occur all the time, will be solved diplomatically, through negotiations and nobody will interfere in our affairs,” Putin said at the meeting of Russia’s Security Council devoted to the issues of the country’s sovereignty and territorial integrity.

“However we hear the language of ultimatums and sanctions more often in the world today, and the definition of national sovereignty is being diffused, disfavored regimes, countries conducting independent politics, or those who get in the way of someone’s interests, are destabilized,” Putin stressed adding that the so-called color revolutions are used to achieve these ends, or “plainly speaking these are the coups d’état engineered and funded from outside.”

Putin also noted that the internal issues of disfavored regimes are normally used to destabilize such countries in different parts of the world. “Most often the bet is placed on radical, nationalistic, if not simply neo-fascist, fundamentalistic forces, as it happened in the post-Soviet states, as it is happening in Ukraine now.”