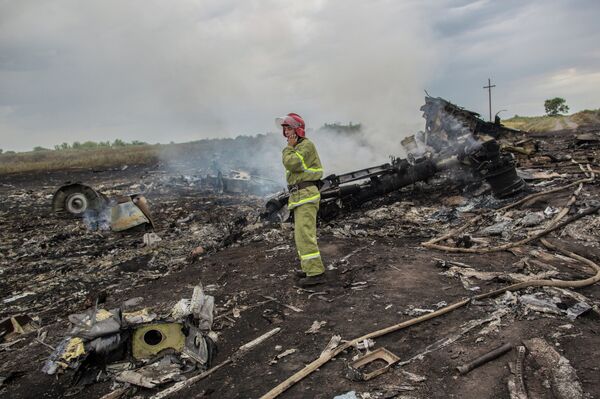 © RIA Novosti . Андрей Стенин
/
Go to the photo bank
Subscribe
Some 186 dead bodies have been found at the crash site of Malaysia Airlines MH 17 in eastern Ukraine, UNIAN news agency reported with reference to the Ukrainian State Emergency Service.

MOSCOW, July 19 (RIA Novosti) – Some 186 dead bodies have been found at the crash site of Malaysia Airlines MH 17 in eastern Ukraine, UNIAN news agency reported with reference to the Ukrainian State Emergency Service.

Currently, employees of the emergency service are gathering the remains of the victims. The bodies will be taken to Kharkiv, where they will be identified in the laboratory. It is assumed that the remains will be transported in refrigerated trucks, which have not yet arrived at the site, according to a RIA Novosti reporter.

Independence supporters of the Donetsk People's Republic (DPR) have said they control the area of the MH 17 crash. DPR representatives refute the information about the kidnapping of bodies.

"Why would we need them [the bodies]? On the contrary, we want the experts to come and take them away," a DPR public prosecutor’s office representative told RIA Novosti.

Earlier, UNIAN news agency reported that militias had allegedly stolen 36 bodies of victims of the crash. The armed men chased away the rescuers and took most of their means of communication, the agency said, citing the press service of the Donetsk Regional State Administration.

On Friday, 30 members of the Organization for Security and Cooperation in Europe (OSCE) visited the crash site. The press office of the OSCE then stated that the observers had not been provided full access to the scene. A DPR militia representative confirmed this information to RIA Novosti, saying they were “afraid they [observers] might plant something [on us].”

Following the Friday talks, Kiev the militia managed to agree on the establishment of a 20-kilometer security zone at the crash site.