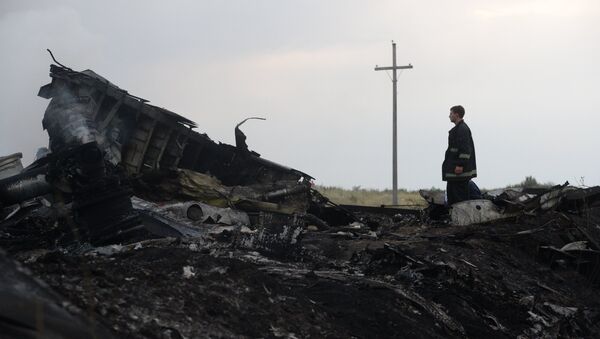 © Sputnik / Mikhail Voskresensky
/
Go to the mediabank
Subscribe
International
India
Africa
The leader of the self-proclaimed Donetsk People’s Republic in eastern Ukraine has traded accusations with Kiev saying it was responsible for downing the Malaysian airliner since local militia doesn’t have the required technologies.

MOSCOW, July 17 (RIA Novosti) – The leader of the self-proclaimed Donetsk People’s Republic in eastern Ukraine has traded accusations with Kiev saying it was responsible for downing the Malaysian airliner since local militia doesn’t have the required technologies.

“I think it’s all crystal clear. The militia has only Manpads [portable air defense systems] and missile systems. Their fire range is only at 2-3 kilometers. So it was either Ukrainian aviation or anti-missile defense,” Donetsk People’s Republic (DPR) leader Alexander Borodai said.

He stressed that local defense forces are not capable of bringing down airliners that usually don’t go lower than 8,000 to 10,000 meters. Boroday said that missile systems at their disposal couldn’t launch a rocket higher than 2,500-3,000 meters.

“We deplore the actions of the Ukrainian military,” the DPR official said, calling Ukraine’s claims that militia was behind the catastrophe “a clear-cut case of libel.”

On July 14, Kiev announced that its missile defense forces in the east Ukrainian combat area were put on alert to “fight off Russian aggressors.” “I guess this combat readiness did its job,” he noted.

Boroday also extended “deep condolences” to those bereaved by the tragic crash of the Boeing jet and vowed to conduct an objective investigation “involving international experts.”

A Malaysia Airlines Boeing-777 flying from Amsterdam to Kuala Lumpur crashed Thursday near the city of Torez in the Donetsk region. There were at least 280 passengers and 15 crew members on board.

Flight controllers reported that the plane disappeared from radar screens while flying at an altitude of about 10,000 meters (some 33,000 feet).