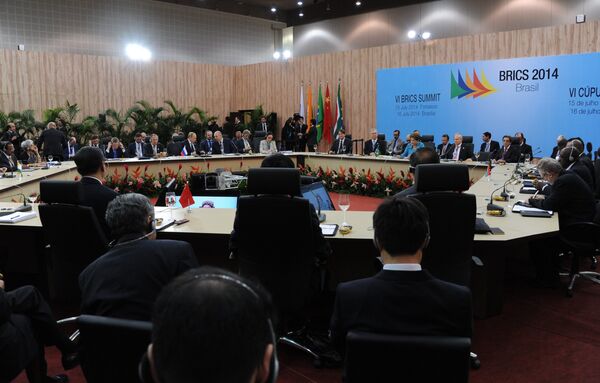 © RIA Novosti . Mikhail Klementiev
/
Go to the photo bank
Subscribe
The much-anticipated BRICS Contingency Reserves Arrangement (CRA) signed during the sixth summit of the world’s five largest emerging world economies will serve as the necessary assistance to the countries in two cases, the head of the Russian Central Bank Elvira Nabiullina said.

"This is the so-called preventive mechanism, when there is pressure on a [country's] balance of payments, to avoid a speculative attack on the national currency," Nabiullina told journalists on the sidelines of the BRICS Summit, outlining the first reason for a country to request access to such resources.

"Or there is a short-term liquidity deficit which happens when a country sees a massive capital outflow," Nabiullina added, explaining that CRA ensures effective protection of the national currencies from financial volatility.

Deputy Governor of the Reserve Bank of India Urjit Patel stressed the larger-scale implications of the deal, which mirrors the International Monetary Fund, and is intended to help the BRICS and other developing nations free themselves from Western dominance in international finance.

"I think is an important signal that BRICS countries are willing to take the lead in changing the way we think about the financial architecture of the world," Patel said during the summit in Fortaleza.

Focusing on the practical implementation of the deal, Head of Russia’s Central Bank, noted that the CRA is still subject to ratification in accordance with the legislative regulations of the constituent countries, with a special operational agreement to be concluded among the central banks of the BRICS countries.

Reports in China's official media following the move to set up the CRA and a BRICS development bank highlighted the opportunity that comes with the agreements to tap market potential and diversify exports.

"The exhilarating outcome is due to the joint efforts from BRICS members to deepen their economic cooperation and tap their potential by innovative means and methods," China’s Xinhua news agency said in a comment.

The BRICS emergency pool of currency will total $100 billion, with Russia's contribution amounting to $18 billion, and provide a buffer in conditions of capital volatility, overcoming the lack of short-term liquidity and rapidly offsetting fiscal deficit triggered by economic turbulence.