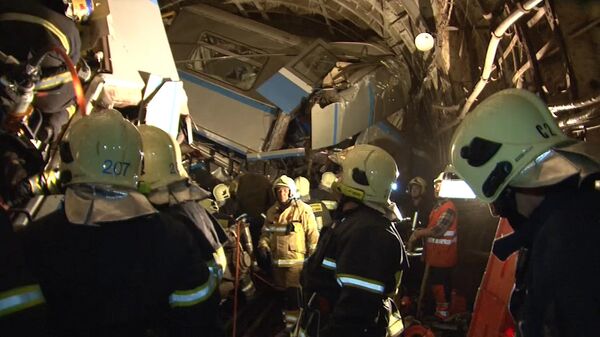 After a thorough investigation is conducted, those to blame for the accident are to be fired and sentenced, the Moscow mayor said.

The accident has left at least 20 people dead and over 100 hospitalized, Spokesman for the Russian Investigative Committee Vladimir Markin said.

The Russian Investigative Committee believes there are no signs of a terrorist act in regard to the deadly derailment of a Moscow metro train.

“There are no signs of a terrorist act; this is most likely a man-made disaster,” Markin told journalists.

The spokesman said all other versions are being investigated, including a sag in the rail line, a technical flaw in the track's junction switch or in any of the cars.

No evidence has so far been found to substantiate the initial version, which said that the train stopped abruptly when a sudden short-term power outage triggered the emergency brakes.

One of the train drivers is missing and he is unlikely to have survived the accident, Markin said.

The number of those evacuated as a result of the accident has reached over 1,100, the regional department of the Emergencies Ministry said on the website.

The accident occurred in the tunnel between the Molodezhnaya and Slavyansky Bulvar stations on the dark blue Arbatsko-Pokrovskaya line as three cars derailed inside a tunnel.

The Russian Health Ministry said a total of 161 people have been injured. Over 120 of them have been hospitalized. Helicopters have delivered 24 victims who were critically injured to hospitals.