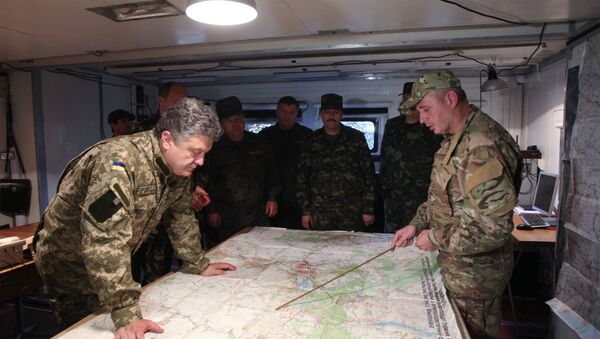 “We could say without a doubt that we’re not just talking about American mercenaries, but also intensive activities on Ukrainian territory by the so-called advisors from Washington. I’m referring to US specialists in the reconnaissance field and law enforcement bodies,” Lukyanov said in an interview.

Drawing on his own sources, Lukyanov asserted, that the actions of such councilors are “not limited to advice as they develop strategic policy, and the country's leadership decisions strictly comply with it.”

On Tuesday, the Russian Foreign Ministry voiced a similar opinion, suggesting that “external influence” underlay Kiev’s decision to call off the ceasefire in the conflict-torn southeastern regions of Ukraine.

Moscow has repeatedly criticized its Western partners for their one-sided position on the Ukrainian crisis, urging the US and EU to take into account the interests of all parties involved, including citizens of the southeastern regions of Ukraine, instead of blindly supporting every move the Kiev authorities make.

Early on Tuesday, Ukrainian President Petro Poroshenko announced that the armed forces, national guard, border troops and security service are no longer restrained by the ceasefire regime, thus enforcing his decision against another extension of the ceasefire in east Ukraine.

Russia’s envoy to the EU Vladimir Chizhov called the refusal to extend the ceasefire a "negative sign," inconsistent with the logic of Poroshenko's 15-step peace plan.