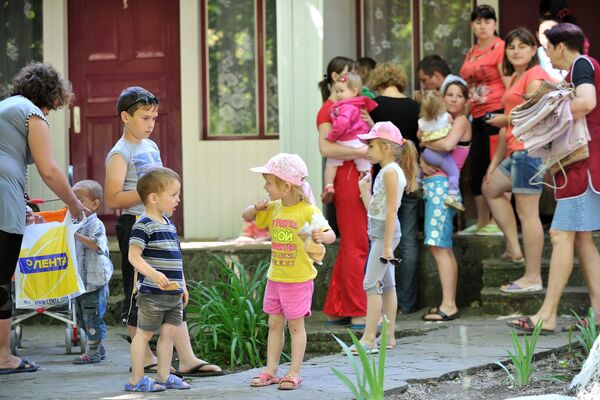 The governor of Russia’s Rostov Region declared a state of emergency for 40 more municipal districts in the region due to an influx of refugees.

ROSTOV-ON-DON, June 30 (RIA Novosti) – The governor of Russia’s Rostov Region declared a state of emergency for 40 more municipal districts in the region due to an influx of refugees.

“By the decree of Vasily Golubev a state of emergency has been declared in 40 more cities and districts due to an increase in citizens arriving to the regions from Ukraine,” the regional government said Monday.

A state of emergency has now been declared across the entire region. The measure is aimed at facilitating the work of temporary accommodation centers and ensuring sustenance for the refugees. In early June, a state of emergency was declared in 15 territories bordering Ukraine.

Amid simmering tensions in the Ukrainian east, where violent clashes between pro-Kiev forces and independence supporters continue, thousands of civilians are leaving their homes and seeking shelter in neighboring Russia.

According to recent estimates by the Russian Emergencies Ministry, over 17,000 Ukrainians have been accommodated in Russian temporary accommodation centers.

About 110,000 people have fled Ukraine to Russia since the beginning of the crisis, and more than 54,000 have been internally displaced, the chief spokesperson for the UN High Commissioner for Refugees (UNHCR), announced last week.

Earlier this month, a delegation of the UNHCR office visited the Rostov Region and praised Russia’s contribution to accommodating refugees from Ukraine.