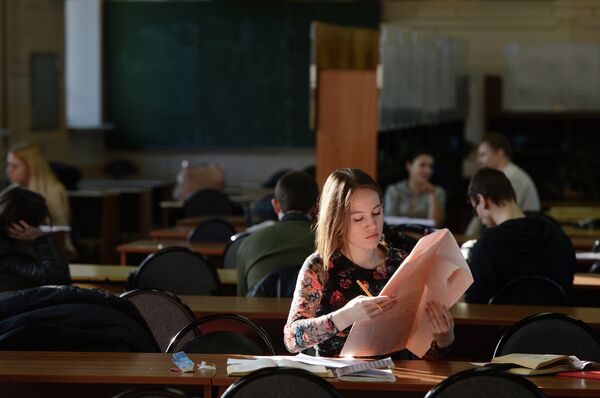 © RIA Novosti . Alexey Filippov
/
Go to the photo bank
Subscribe
The world knows Russia's best engineering universities for their excellent education as their alumni are successful all over the globe.

MOSCOW, June 30 (RIA Novosti), Anna Kurskaya - The world knows Russia's best engineering universities for their excellent education as their alumni are successful all over the globe.

Now these universities are more popular than ever due to their comparatively low tuition fees.

Top-notch Russian technical universities rank high on global ratings. Lesser known universities educate reliable maintenance specialists for sophisticated machinery, whose qualification is recognized in many developed economies. Even if not, graduates know enough to pass certifying examinations in any country.

"Foreign applicants who find their bearings in the labyrinth of Russian university curricula and are attentive to university traditions, the updating of educational material and sustained development, have every chance to get quality training for token money, especially when they choose the universities of developed regional centers."

Practically all national research universities offer the latest knowledge, experts say. They place regional universities on par with household names - the National Nuclear Research University MEPhI, the Moscow Bauman State Technical University, the Moscow Institute of Physics and Technology, and the MISIS National University of Science and Technology, the former Moscow Institute of Steel and Alloys.

Ms Abankina enumerates the best regional universities: "Good engineering instruction is offered at the ITMO (St. Petersburg Institute of Precision Mechanics and Optics), the Nizhny Novgorod, Tomsk and Novosibirsk universities, the Vladimir and Ivanovo polytechnic universities, and two up-to-date universities in Perm. All these establishments are abreast with the latest achievements in their sciences."

She highlights the programs of nuclear and other energy engineering and material processing fields at Tomsk University, the Moscow Bauman State Technical University, and the Moscow Institute of Physics and Technology.  The Bauman and some other universities also have competitive curricula in IT and information security.

The choice of university depends on whether the applicant wants to take up research, industrial design or machine maintenance in the high-tech and other spheres: "If he/she plans to work in R&D, they should apply to a research university, and if they want to find a job in industry, particularly machine-building, they can choose another university, but pay attention to how often they update their curricula. This kind of information can be found on their websites," Ms Abankina said.

Abreast with the latest breakthroughs

A majority of universities make it a point to improve teaching. They pay attention to their staff's research work and take on visiting professors from abroad.

"We train personnel according to the following scheme," says Ivan Arkharov, Bauman University Pro-rector for International Contacts, told RIA Novosti. "We have established 12 excellently equipped research and educational centers as open venues for the communication of professors and researchers from all over the world." They currently employ researchers from 10 countries, India and the United States among them. The centers are known for active postgraduate research and transnational communication, and their innovations reach the classroom.

Mr Arkharov illustrates the arrangement with an example: "A visiting professor from an Italian university saw that we had an excellent technical basis but students were ignorant of European managerial achievements, so he ventured on a three-month lecture course on engineering management, and we had to rehash our curriculum accordingly."

Most staff professors do research and contribute to Russian and foreign journals. Many Russian technical universities have their own periodicals.

"All federal universities' journals are now in the international science and humanities databases. Scientists from other countries refer to these publications and quote them in Russian or English. The Krasnoyarsk and Far Eastern federal universities have made a breakthrough in this field," Irina Abankina says.

Russian professors' contributions to foreign journals help to fill in the information gap between Russian universities and Western science. They also demonstrate the teaching staff's research activities to foreign applicants and help them with the choice of university.

The situation is not so bright with dorms, which often throw foreign students into consternation.  "Many campuses are inferior to their foreign counterparts with a lack of comfort. Too many do not offer Internet and have no libraries and computer rooms. Classmates and the surrounding community are occasionally xenophobic. Lack of friendliness and everyday comfort and impeded cultural development balance out the benefits of good teaching and small fees," Abankina says.

Russian as the teaching language

Russian is the only language of instruction at an overwhelming majority of engineering universities. Many of them offer every condition for its fluent mastery. Particularly, the Bauman University has language classes for all foreign students who want them. There are 72 students at the preparatory department now, Ivan Arkharov says. "They have 10 months for an intensive language course and the ABCs of the basic scientific disciplines - IT, math and physics."

The People's Friendship University of Russia, with its exemplary department of Russian as foreign language, trains students from 146 countries in engineering and other professions.

"Some Russian universities are adding English-language courses to their curricula. But, Russian as a teaching language is also good: Many people speak it all over the world, and specialists with fluent Russian acquired at the university are highly sought out," says Ivan Dementyev, Young Professionals project manager at the Agency for Strategic Initiatives.