Ukraine Split by Coup, Made to Choose East or West – Putin 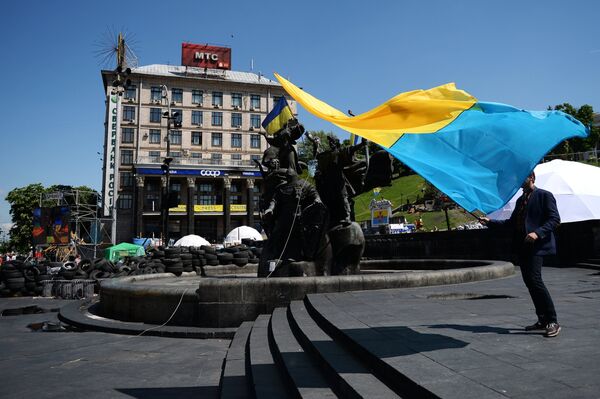 © RIA Novosti . Alexey Filippov
/
Go to the photo bank
Subscribe
An illegal coup orchestrated by forces outside Ukraine has caused a deep rift in Ukrainian society and forced the ex-Soviet nation to choose between Russia and the EU, Russian President Vladimir Putin said Friday.

MOSCOW, June 27 (RIA Novosti) – An illegal coup orchestrated by forces outside Ukraine has caused a deep rift in Ukrainian society and forced the ex-Soviet nation to choose between Russia and the EU, Russian President Vladimir Putin said Friday.

“The anti-constitutional coup in Kiev and attempts to force the artificial choice between Russia and Europe on the Ukrainian people have pushed the society toward a rift, toward a painful internal struggle,” the Russian leader said at a ceremony for foreign ambassadors to present their diplomatic accreditations.

Putin stressed Ukraine needs to return to the path of peace, dialogue and accord and ensure a long-term ceasefire.

“Ukrainians should be back on track of peace, dialogue and accord. Most importantly, a long-term truce must be ensured as a vital precondition for comprehensive talks between the Kiev authorities and representatives of southeastern regions,” Putin said.

The president said Russia is doing its best to assist in the peace process, and the recent decision to recall a legislative authorization for the use of military force in Ukraine is one such example.

On Tuesday, President Putin moved to cancel the authorization of Russian military action in Ukraine to the upper chamber of the Russian parliament, the Federation Council. The council revoked the authorization the following day.

The Kremlin said the decision was aimed at normalizing the situation in the east of Ukraine ahead of the proposed trilateral talks. Independence supporters in Ukraine’s eastern regions have been calling on Kiev to decentralize power and resolve the protracted political stalemate in the country, which is de-facto split into the Ukrainian-speaking west and Russian-speaking east.