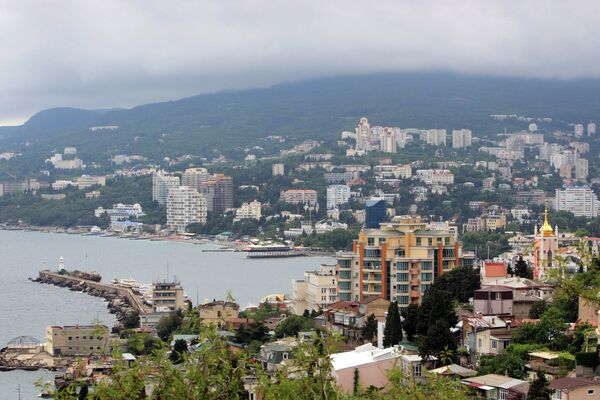 © RIA Novosti . Taras Litvinenko
/
Go to the photo bank
Subscribe
An expedition aiming to examine the environmental situation in Crimea was launched on Thursday in Moscow, according to the chairman of the Green Partrol NGO, Andrei Nagibin.

MOSCOW, June 5 (RIA Novosti) - An expedition aiming to examine the environmental situation in Crimea was launched on Thursday in Moscow, according to the chairman of the Green Partrol NGO, Andrei Nagibin.

“During the three-week expedition, we plan to visit all areas of the Crimean peninsula. Green Patrol inspectors will examine locations where land, water or forest legislation is violated, places where waste management rules are breached and determine air pollution sources. The general sanitary situation at Crimean resorts will be assessed,” he said.

The Green Patrol chairman specified that the expedition is to begin on Ecologist’s Day, which has been celebrated in Russia on June 5 since 2007 and coincides with World Environment Day.

Green Patrol ecologists plan to drive cars all the way from Moscow to Crimea, passing through the towns on the southern coast of the peninsula.

Environmentalists have reported receiving a number of complaints from local residents of various Crimean regions about the quality of drinking water, illegal sand extraction and the blemishing of nature reserve landscapes.

"We plan to select samples of water in the Black and Azov seas, drinking water from the faucets of city residents and from water tanks in villages. Particular attention will be paid to the problems of the Caucasus port on the Taman Peninsula of Krasnodar Territory, which is now the gateway to Crimea, and to water supplies for the steppe regions of Crimea and the port of Sevastopol,” Nagibin announced.

The Green Patrol head added that a large scale audit of “Ukrainian ecological heritage” is to take place, the results of which are to be presented later in autumn.

Crimea, previously an autonomous republic within Ukraine, refused to recognize the legitimacy of the coup-imposed government in Kiev that came to power following the February overthrow of President Yanukovych and voted to secede. On March 16, Crimea held a referendum that saw over 96 percent of voters in the region back the motion to leave Ukraine for Russia.

Ukraine used to supply up to 85 percent of Crimea’s fresh water through the North-Crimean channel that runs from the Dnieper River. Earlier in April, in response to Crimea’s reunification with Russia, the Ukrainian government decided to halt all fresh water supplies to the peninsula, arguing the republic owes the country for earlier supplies.

The water supply problem was partly solved after transferring water from Crimea’s Biyuk-Karasu river to the North Crimean Canal. Additionally, the Russian Ministry of Defense has provided assistance to Crimea, supplying the region with fresh drinking water from artesian wells.