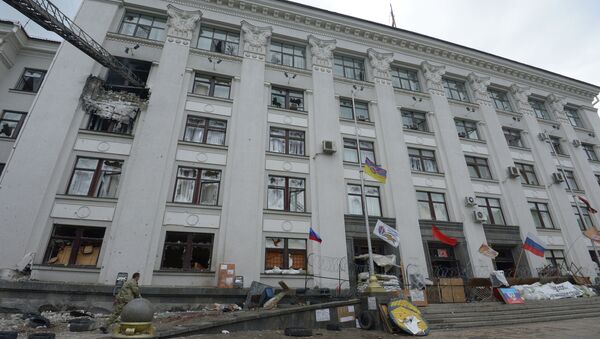 © RIA Novosti . Evgeny Biyatov
/
Go to the photo bank
Subscribe
The Luhansk city authorities called the Monday airstrike on the city center, which killed eight, a war crime on behalf of the Kiev authorities.

LUHANSK, June 3 (RIA Novosti) — The Luhansk city authorities called the Monday airstrike on the city center, which killed eight, a war crime on behalf of the Kiev authorities.

"I declare that the air strike on a non-combatant city is a war crime," the head of the Luhansk People's Republic's press service Vladimir Inogorodsky said in a statement on Tuesday.

He added he was outraged by the following claims that the air attack had never taken place, and the blast had been instigated by the local self-defense.

"I was a direct witness of the attack. I saw planes in the run-up. We have a surveillance camera on our building, and now, Ukrainian media are spreading information that we shot at ourselves from manpads," said Inogorodsky.

On Monday, Ukrainian military stroke Luhansk from the air twice. The first shot was at the administration building in the center of the city. The second airstrike went into a roadblock by Luhansk. According to LPR’s officials, cluster bombs banned by the international convention were used in the attack.

At the same time, a fight between independence supporters and the border patrol lasted all day on Monday.

A total of 13 people were reported dead as a result of the airstrike and the boder fight. Eight members of the Ukrainian special forces were injured, according to the national State Border Guard Service.

The attacks came as part of a special operation launched by Ukraine’s government to crack down on independence supporters in mid-April. The state authorities failed to gain control over the self-proclaimed independent republics.

Moscow has repeatedly condemned the new Kiev authorities for what it called «a punitive operation» and stressed the need for de-escalation of the Ukrainian crisis.