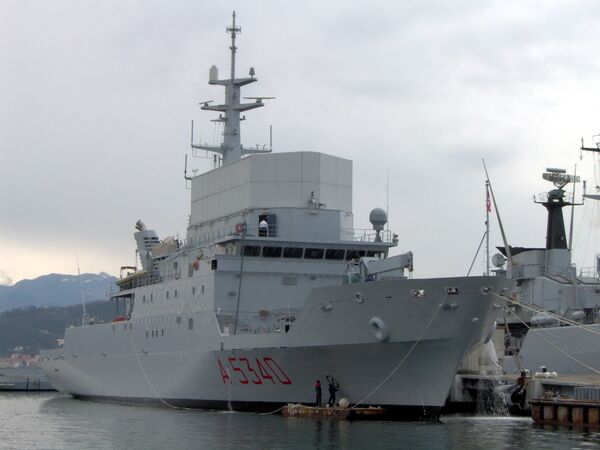 © Photo : Jorge Guerra Moreno
Subscribe
An Italian reconnaissance vessel, the Elettra, is expected to arrive in the Black Sea by June 15, a military-diplomatic source said Tuesday.

MOSCOW, June 3 (RIA Novosti) – An Italian reconnaissance vessel, the Elettra, is expected to arrive in the Black Sea by June 15, a military-diplomatic source said Tuesday.

“An Italian Navy intelligence collection ship will enter the Black Sea on June 15. So, in fact NATO is rotating spy ships inside the Black Sea basin,” the source said.

The Italian Navy vessel carries advanced electronic intelligence gear, including 27 various electronic and acoustic reconnaissance systems. It also has a submersible, which can operate at a maximum depth of 1,000 meters. The spy ship has a crew of 100 sailors and intelligence technicians.

The Elettra will replace the French Navy's intelligence ship, Dupuy de Lome, which left the Black Sea on May 29. Two other NATO warships deployed to the Black Sea, the French stealth frigate Surcouf and the US missile cruiser Vella Gulf, remain in the area.

Following Crimea’s reunification with Russia, NATO has been systematically stepping up its presence near the Russian border, citing a need to protect its allies.

The chairman of the All-Russian Movement for Fleet Support, Mikhail Nenashev, told RIA Novosti that the presence of NATO warships in the Black Sea is a continuation of the West’s aggressive pressure on Russia and is likely to trigger a similar response from Russia.