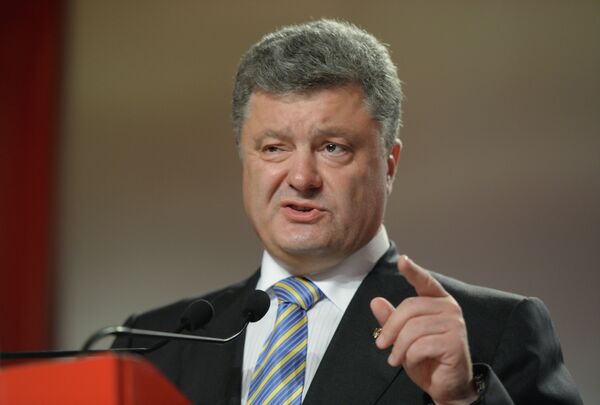 While much of Ukraine's population and most western governments tie high hopes with the newly elected president Petro Poroshenko, a former diplomat and now a successful entrepreneur, foreign critics say his millions are likely to stand in the way of bringing democracy to the country that finds itself in deep political crisis.

MOSCOW, May 30 (RIA Novosti), Nastassia Astrasheuskaya — While much of Ukraine's population and most western governments tie high hopes with the newly elected president Petro Poroshenko, a former diplomat and now a successful entrepreneur, foreign critics say his millions are likely to stand in the way of bringing democracy to the country that finds itself in deep political crisis.

"Huge fortunes don’t make their holders supermen or even wise men. We get wisdom, democratic traditions hold, when people together can freely discuss and debate the problems they face. All nations — Ukraine included — need that sort of democratic interaction," Sam Pizzigati, associate fellow at the Institute for Policy Studies in Washington, DC, told RIA Novosti.

Pizzigati, editor of Too Much weekly magazine, writing on excess and inequality, and author of a 2012 book The Rich Don’t Always Win, has advocated the cause against oligarchy for years. He has adopted the motto of a U.S. Supreme Court Justice Louis Brandeis: “We must make our choice. We may have democracy, or we may have wealth concentrated in the hands of a few, but we can't have both."

"Heavy accumulations of wealth throw the political scales off balance. It doesn’t really matter whether the super-rich hold office themselves or remain in the political shadows. Their wealth will distort democracy either way," he said.

Poroshenko, 48, won the state presidential vote on Sunday with 54.7 percent of the votes. Owner of Kiev-based Roshen confectionary, which brought him a revenue of $1.3 billion and production facilities in Russia, he keeps the distance in the relations with official Moscow, which had on several accounts banned imports of Roshen products.

Poroshenko will now need his money-making skills to bring his country out of the near-bankruptcy state: Ukraine owes Moscow $3.5 billion for gas deliveries.

While Russian President Vladimir Putin is not planning to visit Poroshenko's inauguration ceremony, Moscow said it respected the choice of the Ukrainian people and would maintain diplomatic relations with their country.

The US leader Barack Obama, whose administration met with Kiev authorities throughout the months of protests in Kiev and then in the eastern regions, was among the first to congratulate Poroshenko on his victory.

Former Prime Minister Yulia Tymoshenko, secured 12.81 percent of votes at the vote, which took place weeks after she was released from jail, where she had served three years on charges of exceeding powers in Russian gas deals. Founder of Ukraine's once largest gas importer United Energy Systems of Ukraine, which existed between 1991 and 2009, she was one of Ukraine's richest women at the time.

"It looks like the chocolate king beat the gas queen. You don’t have legitimate authentic leaders over here, what can I say - oligarchs in the pocket of United States and the NATO states," Francis Boyle, professor of international law at the University of Illinois, College of Law, told RIA Novosti.

He said the country's wealthiest people were put in charge for a reason - that is to serve the interests of the US, willing to place NATO's troops as close to Russia as possible. Ukraine may give them this opportunity, he said.

"As we know, Kiev put all the oligarchs allegedly in control of the Russian speaking portions of Ukraine. Well, is that really democracy, putting these rotten corrupt oligarchs in charge? That had nothing to do with democracy," he said.

Ukraine underwent a Western-backed regime change resembling a military coup in February. The country’s parliament ousted President Viktor Yanukovych, changed the constitution and scheduled an early presidential election for May 25.

The vote came amid a large-scale military operation launched by the new Kiev authorities to crack down on protesters refusing to recognize the legitimacy of the government. Since the beginning of the protests, Ukraine has lost the Crimean peninsula to Russia after a referendum in March, and the eastern Donetsk and Luhansk regions declared themselves sovereign republics earlier this month.

On the day of election Poroshenko said the special operation in eastern Ukraine should continue and become more effective.