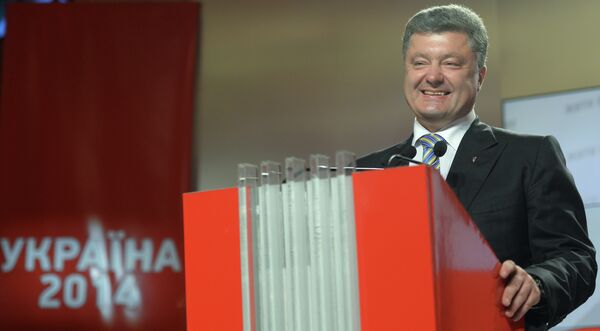 KIEV, May 29 (RIA Novosti) – Billionaire Petro Poroshenko has officially won the Ukrainian presidential election, taking some 54.7 percent of votes after all ballots have been counted, the Central Election Commission said Thursday.

The inauguration ceremony for the new Ukrainian leader is expected to be held June 8-10.

Poroshenko is one of the richest men in Ukraine. He has been dubbed the Chocolate King because of the $1.3 billion fortune he has made in the confectionary business.

The oligarch was named a candidate for the presidential elections by Ukraine’s UDAR party (Ukrainian Democratic Alliance for Reform) led by former boxer Vitali Klitschko.

Poroshenko was one of the closest allies of Ukranian President Viktor Yushchenko during the Orange Revolution in 2004, holding a series of senior government posts thereafter, including serving as foreign minister.

He resigned in 2011 along with the entire government of Yulia Tymoshenko following the election of Viktor Yanukovych to the presidency. In 2012, Poroshenko was appointed Minister of Economic Development and Trade.

The May 25 early presidential vote came amid a large-scale military operation launched by the new Kiev authorities to crack down on protesters refusing to recognize the legitimacy of the government.

On the day of election Poroshenko said the special operation in eastern Ukraine should continue and become more effective.

Moscow called the operation, which has already left scores of civilians dead, a “punitive act.”