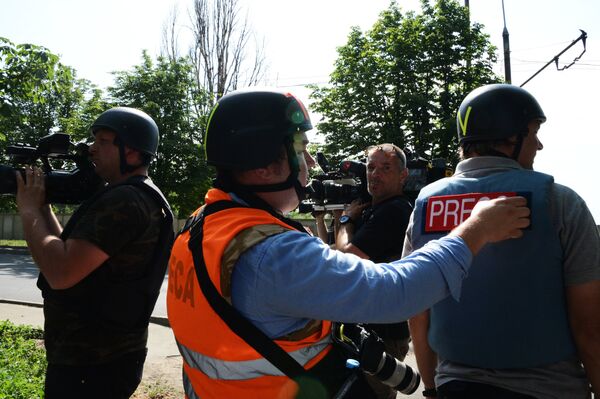 MOSCOW, May 29 (RIA Novosti) – A team of Russian reporters from the Rossiya-24 TV channel has come under fire in Donetsk while covering airport hostilities, the Russian News Service (RSN) said Thursday.

The journalists were fired at from large-caliber weapons. “They heard the sounds of bursting shells and also automatic gunfire. The shooting continued for around 10 minutes,” the report said.

No one was hurt in the attack and the journalists safely left the scene.

Some 100 people have been killed in clashes this week with pro-Kiev troops in the eastern Ukrainian city of Donetsk. Over 50 members of local self-defense forces and nearly the same number of civilians are among the dead.

Most members of self-defense forces were killed when Ukrainian troops opened fire on two Kamaz vehicles carrying injured people. Some 15 corpses still remain near the airport.

The National Guard has been preventing people from taking them by shooting at all those who try to so. More than a dozen of the killed members of self-defense forces who are local citizens remain in the morgue.

Over the past two months, reporters of Russia’s leading channels have been kidnapped, beaten, threatened and denied access to Ukraine.

Journalists of Russian news portal LifeNews, Oleg Sidyakin and Marat Saichenko, were detained near the city of Kramatorsk in the Donetsk region on May 18 and charged with promoting terrorism. Russian journalists were held captive by Ukrainian forces for almost a week before being released.