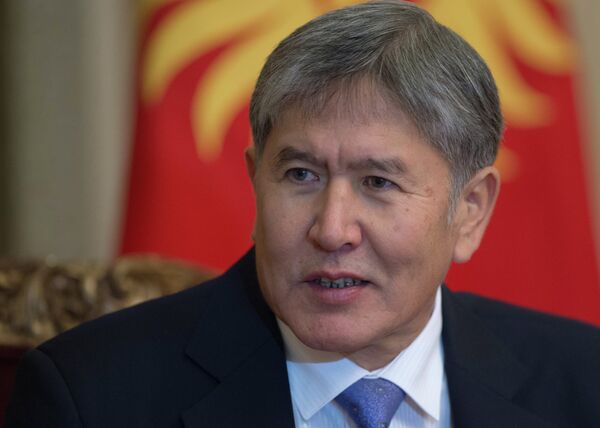 © RIA Novosti . Sergey Guneev
/
Go to the photo bank
Subscribe
Kyrgyz President Almazbek Atambayev said Thursday he expects his country to join the Eurasian Economic Union by the end of the year.

ASTANA, May 29 (RIA Novosti) – Kyrgyz President Almazbek Atambayev said Thursday he expects his country to join the Eurasian Economic Union by the end of the year.

“We would like to mark the New Year as a member of the Eurasian economic union,” Atambayev said.

Moscow and Bishkek have agreed to create a fund aimed at helping Kyrgyzstan integrate into the Customs Union, Atambayev said.

“We agreed today with the Russian side to establish a fund… that aims at the integration of Kyrgyzstan to the Customs Union, and naturally the Kyrgyz side will provide to the fund as well to the Russian investments maximum safeguards,” he said.

Bishkek expects preferences for the Central Asian republic’s major markets and a $200 million aid package to equip border check points for the accession to the Customs Union and the Eurasian Economic Union.

Earlier the Kyrgyz side said the financing issue for the integration has not been resolved as part of bilateral talks with Russia.

The Eurasian Economic Union (EAU) was conceived as an EU-style bloc aimed at promoting integration and free trade between its three member states, Russia, Kazakhstan and Belarus, with more countries to follow.

Russian President Vladimir Putin said earlier on Thursday the final treaty was completely ready to be signed. The treaty is expected to come into force on January 1, 2015.