No Plan for Poroshenko to Visit Russia Yet – Lavrov 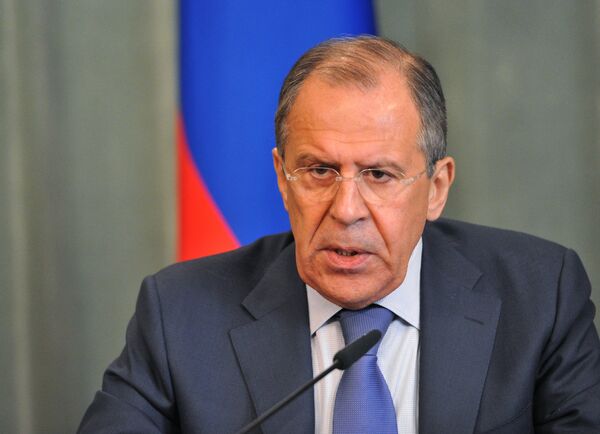 MOSCOW, May 27 (RIA Novosti) – A visit to Russia by Ukraine’s president-elect Petro Poroshenko has not yet been discussed, Russian Foreign Minister Sergei Lavrov said Tuesday.

“The visit to Russia by Poroshenko is not being considered or discussed via diplomatic channels or in any other way,” he said.

Sunday's early presidential election in Ukraine came amid a large-scale military operation launched by the Kiev regime to crack down on protesters in the east refusing to recognize the legitimacy of the government.

After claiming victory in the election, Poroshenko said the special operation in eastern Ukraine should continue and become more effective.

Commenting on the remarks, Lavrov said intensifying the military operations in southeastern Ukraine would not facilitate a warm reception for Poroshenko.

“If it is considered that before the upcoming inauguration of Petro Poroshenko, the army using heavy armament, the national guard as well as the [ultra-extremist movement] Right Sector … are to suppress the resistance in Southeastern Ukraine, and [Poroshenko] to enter Donbass as a winner, then I think this will hardly create favorable conditions to a warm reception in the Region of Donbass,” Lavrov said.

Lavrov said Russia could become a serious and reliable partner for Ukraine and hopes the new Ukrainian authorities will act in the interests of all Ukrainian people.