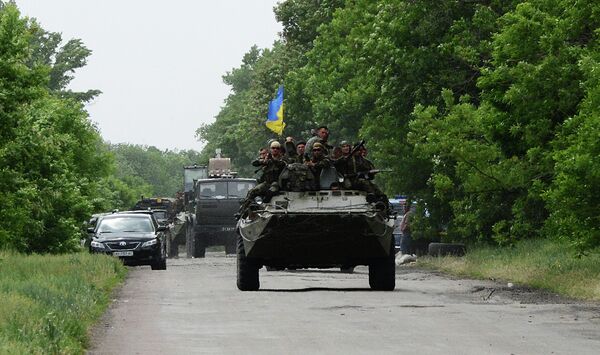 KIEV, May 26 (RIA Novosti) – Billionaire Petro Poroshenko, who has claimed victory in Sunday’s presidential vote in Ukraine, said the special operation in eastern Ukraine should continue and become more effective.

“I have no information that it [operation] should now be stopped. I support its continuation and I demand the change of its formation – it should become shorter in terms and should become more effective,” Poroshenko said, adding that military units should be better equipped.

The statement came as Russian Foreign Minister Sergei Lavrov said Monday the resumption of the special operation in eastern Ukraine would be a tremendous mistake.

He expressed hope that Poroshenko, as Ukraine’s new president, would do his best to prevent extremist and radical views from becoming widespread.

New clashes broke out Sunday between Ukrainian troops and local self-defense forces in Ukraine’s east and south, leading to more casualties and bumping up the death toll that has been increasing ever since coup-imposed Prime Minister Arseniy Yatsenyuk announced the beginning of an “anti-terror” operation in the region in mid-April.

Moscow called the operation, which has already left scores of civilians dead, a “punitive act.”