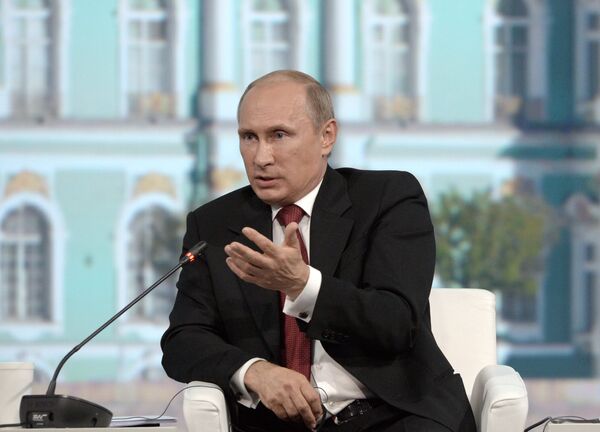 © RIA Novosti . Alexei Danichev
/
Go to the photo bank
Subscribe
ussian President Vladimir Putin suggested on Friday that the United States planned to receive competitive advantages in trade and economic ties with Europe by insisting on sanctions against Russia.

ST. PETERSBURG, May 23 (RIA Novosti) – Russian President Vladimir Putin suggested on Friday that the United States planned to receive competitive advantages in trade and economic ties with Europe by insisting on sanctions against Russia.

“Insisting on imposing sanctions against Russia, I have the suspicion that maybe our American friends, and they’re pretty sophisticated guys, they, perhaps, even want to get certain competitive advantages in their trade and economic ties in Europe? I simply just don’t see, don’t understand any other incentive motives that are that serious or deep, but I hope that common sense prevails,” Putin said.

The US and EU have imposed sanctions against Russia in connection to its policy in Ukraine and the reunification of Crimea. The sanctions have so far remained targeted and consist of government-approved lists of individuals and companies facing visa bans and asset freezes.

Amid the worsening economic and political relations between Russia and the West, several Western companies withdrew from the St. Petersburg International Economic Forum (SPIEF), an annual gathering of political and business leaders currently taking place in Russia's northern capital.

Moscow has repeatedly stated that the language of sanctions is "inappropriate and counterproductive" in the modern world, where economic issues tie countries together, and warned its Western partners about the "boomerang effect" that sanctions would have.

Russia has been especially baffled by the Western threat to impose sanctions should the upcoming presidential election in Ukraine be disrupted, because Russia has no relation to the voting, Deputy Foreign Minister Alexei Meshkov said Tuesday.