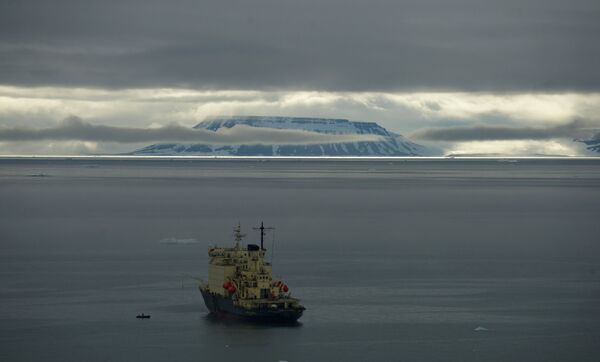 © RIA Novosti . Ramil Sitdikov
/
Go to the photo bank
Subscribe
Tense relations between Russia and the US and NATO could potentially be cooled through Arctic cooperation, according to the program director at the George Washington Institute for European, Russian, and Eurasian Studies.

WASHINGTON, May 22 (RIA Novosti), Leandra Bernstein – Tense relations between Russia and the US and NATO could potentially be cooled through Arctic cooperation, according to the program director at the George Washington Institute for European, Russian, and Eurasian Studies.

“I think the Arctic is, today at least, one of the last places for cooperation with Russia following the Ukrainian crisis,” Marlene Laruelle said.

“US-Russia [Arctic] cooperation will probably be less directed to cooperation on security issues because of the Ukrainian crisis,” she specified, “but there are several other elements that are still open for discussion.”

Since 2011 the US has increased its stake in Arctic security and development and currently holds the chairmanship for the Arctic Council. The US is planning to invest $1.5 billion focusing on the Arctic, according to former State Department official Heather Conley.

However, US assets in the region are limited and they rely on dated technology and borrowed equipment from other Arctic nations. Russia is currently the only country employing nuclear-powered icebreakers.

“The securitization trend we see in the Arctic from the Russian side is mostly not an issue of military aggressiveness, but it is a business issue,” Laruelle said.

Concerning Russia’s delimitation of its continental shelf and control over the North Sea Pass, Laruelle said “Russia is playing by the rules.” The demarcation of national and international waterways is contested within the Arctic Council, but the first voyage of a Chinese merchant ship, Hong Xing, through the North Sea Pass last year set a precedent when the ship adhered to all Russian requirements for passage.

There are hopes that increased trade will take place through Arctic routes. The route is expected to see between ten and twelve commercial trips this year.

Laruelle’s remarks were part of a panel discussion at the Wilson Center on the interests of the Arctic nations, and the increasing participation in the region by non-Arctic players, particularly China, Japan, Korea, and Singapore.