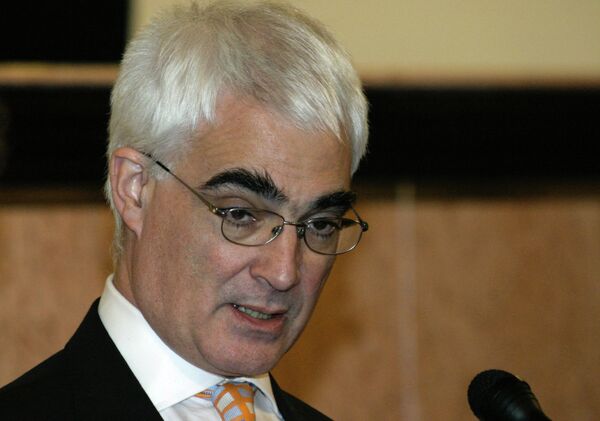 © RIA Novosti . Alexey Panov
/
Go to the photo bank
Subscribe
Alistair Darling, the former UK Chancellor of the Exchequer and leader of the campaign aiming to keep Scotland within the UK "has effectively been dumped", a Conservative party source has told a right-wing newspaper in London.

GLASGOW, 13 May (RIA Novosti), Mark Hirst – Alistair Darling, the former UK Chancellor of the Exchequer and leader of the campaign aiming to keep Scotland within the UK "has effectively been dumped", a Conservative party source has told a right-wing newspaper in London.

Darling has been subject to months of speculation about his perceived poor leadership of the “Better Together” campaign which seeks to persuade voters in Scotland to back no in an independence referendum that will take place on 18 September.

A spokesman for Better Together tried to quell the story, telling RIA Novosti that the speculation was “ill-informed nonsense.”

“Alistair is the leader of the campaign, he has been since the start, he is today and will be right up to the vote itself,” David Ross, spokesman for Better Together added.

But when asked by RIA Novosti when Darling would next formally lead a Better Together event, Ross was unable to provide any details and refused to comment further.

The unattributed quotes, given to the Conservative Daily Mail newspaper in London, followed similar criticisms made of Darling last month, when one senior Conservative source reportedly described the former Chancellor as, “a middlingly competent accountant with zero charisma.”

Jim Sillars, former Deputy Leader of the Scottish National Party (SNP) and author of “In Place of Fear II”, a book that sets out a vision of an independent, socialist Scotland told RIA Novosti, “The problem with the No-campaign is not the messenger, but the message.”

Sillars, a former Labour, and later SNP Member of Parliament at Westminster added, “There is an initial admission by them that Scotland is viable. Then they change course and warn us of a long trail of disasters Scots shall create if we choose independence.

“The No-campaign began with Project Fear, which can only succeed if the people are frightened, but that won’t be the case this time,” Sillars said.