Referendum on Status of Odessa Region Not Yet Possible – Activist 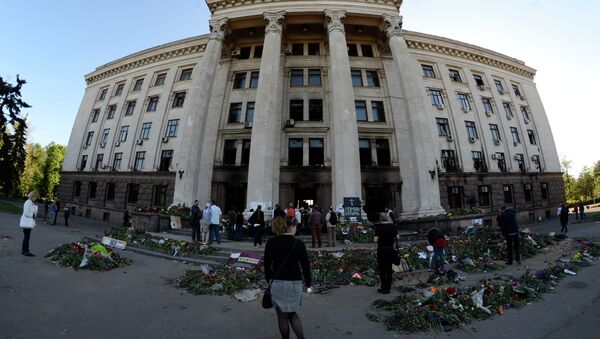 © RIA Novosti . Anton Kruglov
/
Go to the photo bank
Subscribe
A referendum on the status of the Odessa region is currently impossible as there is no single control center, as in Donetsk and Luhansk, activist Yegor Kvasnyuk told RIA Novosti.

MOSCOW, May 13 (RIA Novosti) – A referendum on the status of the Odessa region is currently impossible as there is no single control center, as in Donetsk and Luhansk, activist Yegor Kvasnyuk told RIA Novosti.

"At the moment, we cannot speak about a referendum, some kind of consolidated program. The reason is simple: we are not united, there is no single control center, the one that Crimea, Donetsk and Luhansk had. Therefore, we cannot say that people are able to gather and to put up some resistance," the leader of the Odessa liberation movement Kulikovo Field Yegor Kvasnyuk said at a RIA Novosti press conference.

Kvasnyuk said a large number of Right Sector militants are currently stationed in Odessa. "We have more than four thousand members of Right Sector in the city and in the Odessa region. Every fifth of them is armed with light weapons, they have rocket launchers,” Kvasnyuk said.

Earlier Kulikov said that after the death of people in Odessa, the city will initiate “partisan” resistance against armed militants.

The clashes in Odessa broke out May 2 between pro-federalization activists on one side and fans of the Odessa and Kharkiv football teams on the other, joined by Euromaidan activists.

At least 46 people died, three went missing and 214 were injured, according to the Ukrainian Interior Ministry. The interim government in Kiev has been accused by Odessa officials of covering up the actual death toll of at least 116.

The skirmishes were the bloodiest episode of violence in Ukraine since the start of the Ukrainian crisis in February.

The Russian Foreign Ministry called the events a result of the “criminal irresponsibility of the Kiev leadership indulging insolent nationalist radicals, including Right Sector, who are staging a campaign of physical terror against supporters of federalization and real constitutional changes in Ukrainian society.”