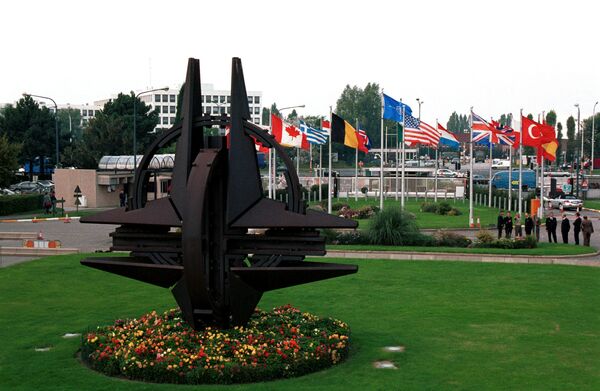 © Photo : NATO photos
Subscribe
International
India
Africa
NATO is using the Ukrainian crisis as a smoke screen for a war plan and the US has already decided to permanently station troops in Eastern Europe, says Harvard-educated professor Francis Boyle, a US-based expert on Russia.

WASHINGTON, May 8 (RIA Novosti), Lyudmila Chernova – NATO is using the Ukrainian crisis as a smoke screen for a war plan and the US has already decided to permanently station troops in Eastern Europe, says Harvard-educated professor Francis Boyle, a US-based expert on Russia.

NATO leaders are poised to meet in September to debate the initiative to permanently base additional forces in Eastern Europe.

“This is just a trial balloon, but in reality it is a war plan unfolding here,” Boyle told RIA Novosti Thursday. “The Ukrainian crisis had been planned as well as the war. There was a war plan, there was a war game. Then it was revised and implemented.”

Asked whether the Ukrainian crisis could lead to the permanent stationing of NATO troops in Eastern Europe, US General Philip Breedlove, NATO’s Supreme Allied Commander in Europe, said it is “something we will have to consider.”

“We are seeing steps now being taken that were planned in advance,” Boyle said, adding that Russia has not presented any threat to NATO members. “This is all being used as a pretext to bring NATO military forces, as Rasmussen said, by air, sea, and land right up to the borders of the Russian Federation. They are clearly going ahead with this.”

Boyle extolled Russia for trying to exhaust all diplomatic means possible to resolve the Ukrainian crisis, and accused the United States and NATO of a deliberate escalation. President Putin announced Wednesday that he was ordering a pullback of Russian troops along the border with Ukraine.

“So, that the US won’t be provided with any more pretexts for hostile provocative maneuvers that they are going to take in any event,” Boyle asserted.

The professor emphasized that Russian President Vladimir Putin is in a very difficult and dangerous situation and needs to be very careful.

“The US has already resumed the Cold War with the neo-Nazi coup d'état in Ukraine that the United States sponsored, controlled, and directed,” he said.

The expert thinks that Zbigniew Brzezinski, former US National Security Advisor under President Carter, is the one calling the shots behind the scenes with President Obama. Brzezinski was his mentor at Columbia, ran Obama’s presidential campaign in 2008, all staffed the Obama administration with his people.

“Brzezinski is an expatriate Pole who hates Russians and Russia with a passion, and wants to see Russia broken up,” Boyle said. “This is a very dangerous policy being pursued here. They are trying to provoke Putin to invade Ukraine.”

“I think they plan to take over all of Ukraine to solidify control of Ukraine by the neo-Nazi thugs in Kiev, and then at least de jure to bring NATO military forces into Ukraine under one pretext or another,” he explained.

“Obviously, NATO is not going to admit Ukraine, but de facto this is what’s going on. This is their ultimate objective. Since it’s clear they can’t admit Ukraine de jure to NATO, so they are now making Ukraine a de facto NATO state.”

NATO has repeatedly blamed Russia for the escalation of tensions in Ukraine and building up arms and troops on the country’s border. The alliance has already used the crisis to justify an expansion of its military forces near Russian borders, bumping up the number of air patrol missions in Eastern Europe.