Kiev Authorities Ready for Dialogue With Activists in Southeast 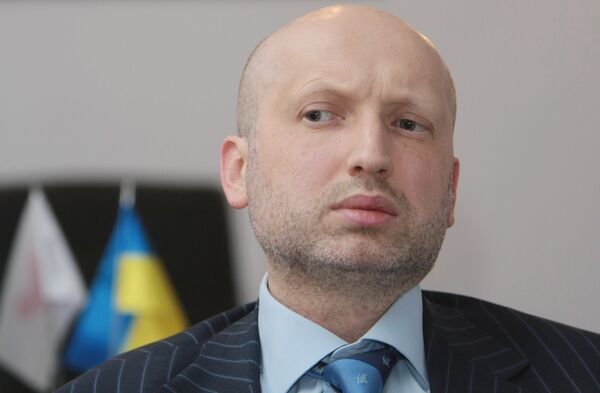 Ukraine's authorities are ready to talk to representatives of local self-government and activists of the regions demanding decentralization, but not with armed people, acting Ukrainian President Oleksander Turchynov said Thursday.

KIEV, May 8 (RIA Novosti) – Ukraine's authorities are ready to talk to representatives of local self-government and activists of the regions demanding decentralization, but not with armed people, acting Ukrainian President Oleksander Turchynov said Thursday.

Turchynov, appointed as president by the country’s parliament after the overthrow of Viktor Yanokovych, said the goal of the authorities was to establish stability and economic development of an independent and democratic Ukraine – "peace, calm and security of Ukrainians," according to the parliament’s press service.

Authorities are ready to find agreement with the regions on specific issues on the development of a united Ukraine, Turchynov said.

"We are prepared to discuss these issues with the representatives of the local self-government, public activists and entrepreneurs of the Donetsk and Luhansk regions, but civilized countries do not talk to armed criminals, who have human blood on their hands. According to law, they get neutralized," he said.

A possible amnesty would apply to those who voluntarily give up weapons, empty buildings and who had nothing to do with killings and other capital crimes, he said.

Tensions between federalists and nationalists have risen in recent days in the country's southeastern regions, which are preparing for a referendum on their status. The vote was initially scheduled for May 11, but may be delayed as Russian President Vladimir Putin called for a postponement "to create the necessary conditions" for nationwide dialogue.

Putin called Ukraine's early presidential elections, set for May 25, "a move in the right direction," but said they will not decide anything if all Ukrainians did not understand how their rights would be protected after the vote.