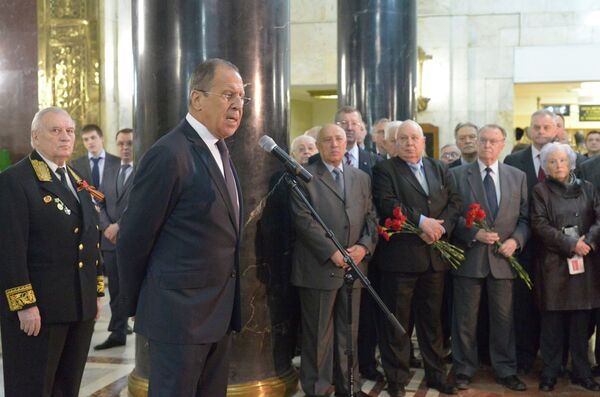 “For years Europe has closed its eyes on the fact that this [fascist] ideology is gaining new backers, its supporters are enlisting new followers, holding marches in honor of former SS individuals who were convicted criminals by the Nurnberg Tribunal,” Lavrov said at a flower laying ceremony for Victory Day in Moscow.

“But this is happening now, this is not just simply marches with banners praising Nazi criminals, it is already the appearance of live fascism,” he added.

The comments were in response to the tragedy last Friday in Ukraine’s Odessa, where scores of peaceful pro-referendum protesters were burned alive inside a trade union hall.

Earlier, a Kiev-based reporter with the Voice of Israel, Edward Dox, told RIA Novosti that Nazism and anti-Semitism had been a growing problem in Ukraine ever since the regime in Kiev seized control of the country.

Dox said the new government didn’t even try to dissociate itself from the heritage of Nazi collaborator Stepan Bandera. Those in power in Kiev, especially from the Svoboda and Right Sector parties, frequently employ anti-Semitic rhetoric, he added.

With the presidential campaign in Ukraine in full swing, a slew of Ukrainian presidential candidates have been actively propagating their far-right views.

Presidential hopeful Oleh Tyahnybok is an active promoter of the ultranationalist ideas of Bandera, who collaborated with Nazi Germany during World War II in the wartime ethnic cleansing of Poles, Jews and Russians.

Dmitry Yarosh, who is also one of the presidential candidates, heads the Right Sector radical nationalistic movement, which was an important force at the Euromaidan protests in Kiev.