Putin Calls on Ukrainian Federalists to Put Off May 11 Vote 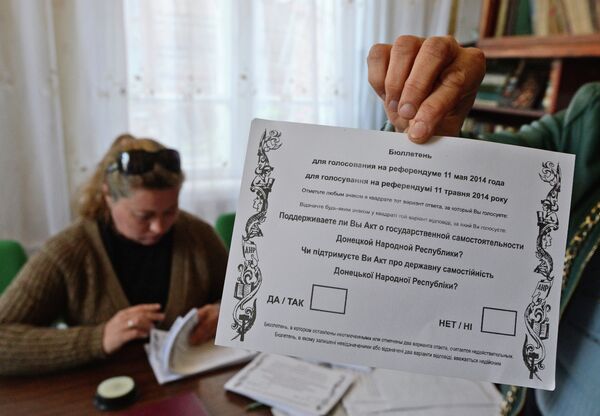 MOSCOW, May 7 (RIA Novosti) – Russian President Vladimir Putin on Wednesday urged pro-federalization activists in southeastern Ukraine to postpone a referendum on self-determination to ensure the start of nationwide dialogue.

“We are calling on representatives of regions in southeastern Ukraine, supporters of federalization in the country, to postpone the referendum set for May 11 in order to create all necessary conditions for this dialogue,” Putin said at a joint news conference with OSCE Chairman Didier Burkhalter in Moscow.

A protest leader in Donetsk, Alexander Vaskovsky, said there was no need to put off the vote.

“I have not yet seen Putin’s address, but there is no need to do this [postpone the vote]. I’m extremely negative about this,” he said.

Early presidential elections were scheduled for May 25 in Ukraine after the country’s elected president Viktor Yanukovych was ousted late February following the so-called Euromaidan mass rallies in Kiev.

Citizens of the mainly Russian-speaking southeastern regions of Ukraine have refused to recognize the legitimacy of the country’s interim government and have announced referendums on self-determination in Donetsk and Luhansk regions, to be held on May 11.

Kiev’s current authorities have launched a special operation to crack down on the protesters, leading to violent clashes in major towns of southeastern Ukraine and dozens of casualties. Last Friday, 46 protesters were killed and over 200 were injured in the port city of Odessa.