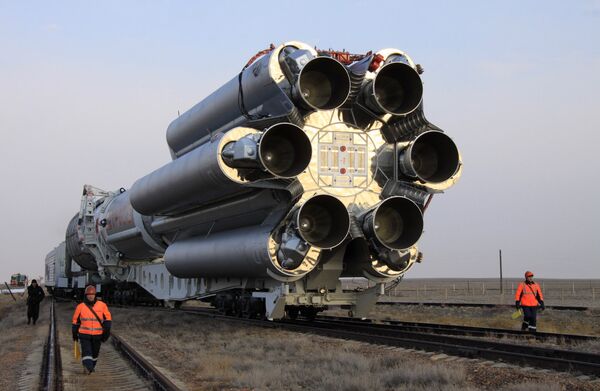 BRUSSELS, April 30 (RIA Novosti) – The newly imposed US sanctions against Russia will not affect the work of the International Launch Services (ILS) company, a spokesperson for the Luxembourg-based satellite fleet operator SES told RIA Novosti Wednesday.

“This is what ILS told us. International Launch Services has all the necessary permits from the US Department of State to execute the previously scheduled launches till 2016,” Yves Feltes said.

“Any new licenses will be considered by the US Department of State on a case-by-case basis. As for the current sanctions imposed by the US Treasury Department against Russian citizens and companies, they did not affect our work,” Feltes added.

The ILS Company sells commercial contracts for satellites on the Russian Proton rocket. Its majority interest belong to Russia’s Khrunichev, which builds the Proton.

Telecommunications satellites built for SES, Turkish Turksat and British Immarsat are now scheduled for launch from the Baikonur space center in Kazakhstan. An Inmarsat spokesperson earlier told RIA Novosti that the company remains on course to launch their second and third Global Xpress satellites by the end of the year.

Media reports emerged earlier suggesting the liftoff could be cancelled as the satellites contain some US-manufactured electronic components which fall under US export restrictions.

The United States announced Monday it had restricted exports of high-tech defense products to Russia.

“Effective immediately, the department’s Directorate of Defense Trade Controls will deny pending applications for export or re-export of any high technology defense articles or services. In addition, the department is taking actions to revoke any existing export licenses which meet these conditions. All other pending applications and existing licenses will receive a case-by-case evaluation to determine their contribution to Russia’s military capabilities,” State Department spokesperson Jen Psaki said in a statement.