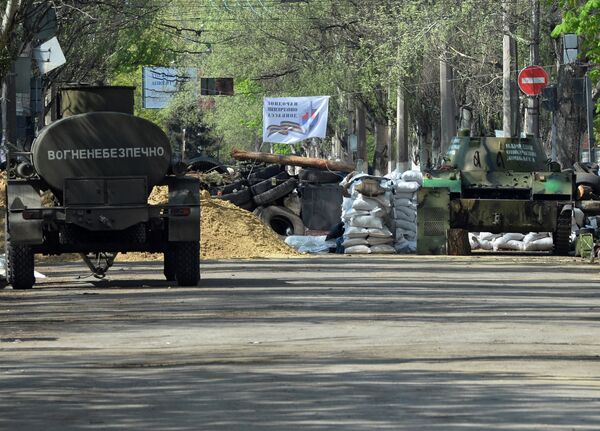 "We are surrounded and sieged. Still, we will make a stand," Ponomarev said.

The self-defense forces are "strong enough to resist," he said. "We have enough forces, but not so many weapons.”

A Russia 24 TV channel reporter on the scene said that one of the columns of armored vehicles is already in the city.

Two checkpoints have been attacked, and a gunfight at one of them is continuing, Ponomarev said.

The clashes were in general confined to the outskirts of the city.

Residents were warned not to leave their homes. "Everyone is warned, if need be, they will all be evacuated," the people’s mayor said.

Federalization supporters in the eastern cities of Kharkiv, Donetsk, Gorlovka, Slaviansk and Kramatorsk have refused to recognize the legitimacy of the current Ukrainian government and have demanded a Crimea-style referendum on the status of their regions.

After deadly attacks on protesters last Sunday, Slaviansk has remained a hotspot for demonstrations despite the Kiev interim government’s vow to crack down on the pro-federalization drive inspired by last month’s referendum in Crimea.