Ukraine’s Poroshenko Could Win Presidency in First Round – Poll 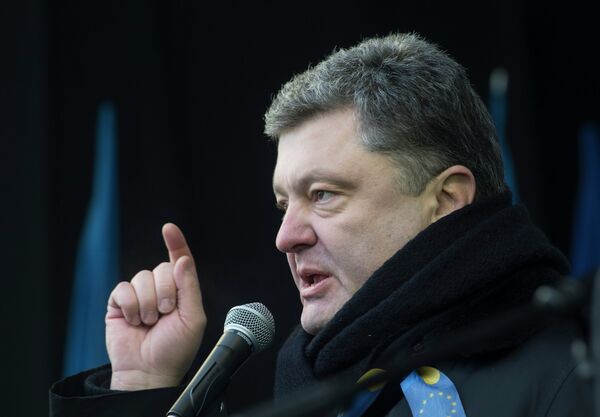 © RIA Novosti . Ilya Pitalev
/
Go to the photo bank
Subscribe
Ukrainian businessman Petro Poroshenko continues to lead the presidential race with his monthly rating rising by eight percent, according to a poll conducted by the Center for Social and Marketing Research Socis and Kiev’s International Institute of Sociology.

KIEV, April 23 (RIA Novosti) – Ukrainian businessman Petro Poroshenko continues to lead the presidential race with his monthly rating rising by eight percent, according to a poll conducted by the Center for Social and Marketing Research Socis and Kiev’s International Institute of Sociology.

The poll showed that nearly 33 percent of all respondents and 48.4 per cent of those who are determined to vote on May 25 would choose Poroshenko as Ukraine’s next president. The figures indicate that the businessman is nearing the 50 percent threshold to win the election in first round.

According to Socis sociologist Alexander Chashkovsky, Poroshenko’s popularity growth was caused by the decision of Vitali Klitschko, the leader of the Udar party, to pull out of the presidential elections. The polling expert added that Poroshenko tops the rating even in pro-Russian eastern and southern regions of Ukraine.

Poroshenko’s main rival, former Prime Minister Yulia Tymoshenko, came in at 14 percent of votes in the poll, an increase of 1.2 percent over the past month.

The Ukrainian parliament called for early presidential elections on May 25 following the unconstitutional ouster of President Viktor Yanukovych in February amid violent street protests. At least two dozen candidates have announced their intention to run in the race, a motley crew of businessmen, politicians and radical right-wing activists.

Petro Poroshenko was named a candidate for the upcoming presidential elections by Ukraine’s Udar party (Ukrainian Democratic Alliance for Reform) led by former boxer Vitali Klitschko, who pulled out of the race and backed Poroshenko.

Poroshenko was one of the closest allies of Viktor Yushchenko during the Orange Revolution in 2004, holding a series of senior government posts thereafter, including serving as foreign minister.

He resigned in 2011 along with the entire government of Yulia Tymoshenko following the election of Viktor Yanukovych to the presidency. In 2012, Poroshenko was appointed Minister of Economic Development and Trade. He is one of the richest people in Ukraine and Forbes estimated his net worth at $1.3 billion earlier this year.