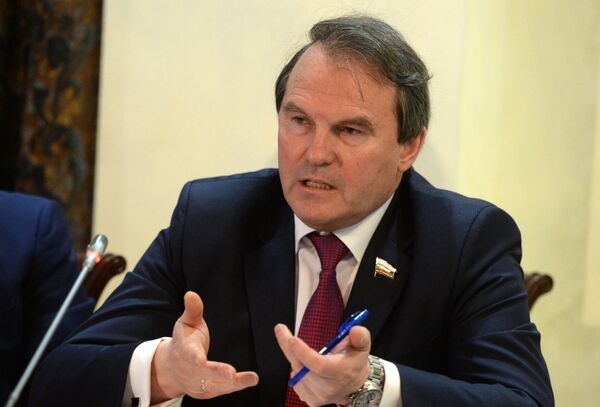 © RIA Novosti . Mikhail Voskresenskiy
/
Go to the mediabank
Subscribe
International
India
Africa
A senior Russian lawmaker told RIA Novosti Tuesday that a campaign to capture pro-Russian activists by Ukrainian authorities was launched at the behest of the United States.

MOSCOW, April 22 (RIA Novosti) – A senior Russian lawmaker told RIA Novosti Tuesday that a campaign to capture pro-Russian activists by Ukrainian authorities was launched at the behest of the United States.

“The same reward was offered in the US in times of McCarthyism, during the ‘witch hunt’ and as the US controls the Maidan, they expanded this practice to Ukraine, where it was gladly picked up,” said Igor Morozov, referring to $10,000 cash rewards offered by authorities in Dnipropetrovsk Region for each pro-Russian activist detained.

Morozov, a member of the Russian Federation Council's Committee on Foreign Affairs, said the actions by the Ukrainian authorities violate the agreements reached last week at multi-party talks in Geneva, deepening the conflict between eastern and western parts of the country.

“Instead of establishing a dialogue with the population to seek compromise to overcome a deadlock in the region, the Dnipropetrovsk authorities have just further deadlocked the situation,” said the senator.

In a bid to de-escalate the conflict, top diplomats from Russia, Ukraine, the United States and the European Union approved a statement last week calling on the sides in Ukraine to refrain from violence, extremism and provocations, disarm militants and launch a national dialogue on constitutional reform.

Eastern Ukraine has been swept by rallies since last month. Federalization supporters in Kharkiv, Donetsk, Gorlovka, Slaviansk and Kramatorsk have refused to recognize the legitimacy of the current Ukrainian government and are urging interim authorities to hold referendums.

Dnipropetrovsk Region has so far refrained from active confrontation. Authorities there have signed a treaty with the protesters and allowed them to use a government building for regular gatherings.