Confronting Both Russia and China 'Strategic Mistake' for US – Russian Lawmaker 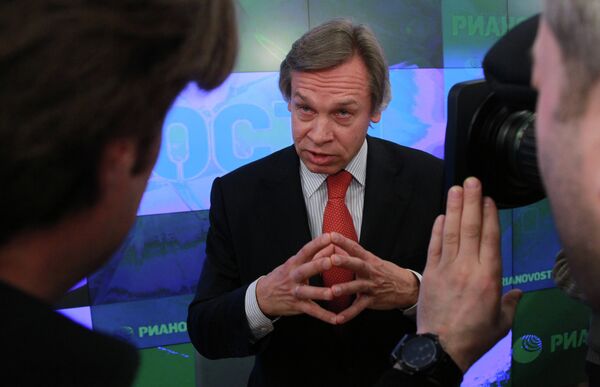 “For the United States, Russia is an enemy and China is a potential enemy. But the confrontation course with both major powers is a strategic mistake,” Alexei Pushkov, who chairs the foreign affairs committee in Russia’s lower house, wrote.

US President Barack Obama denied last month that Moscow was Washington’s number one geopolitical foe, calling Russia “a regional power that is threatening some of its immediate neighbors, not out of strength but out of weakness.”

Washington’s relations with Beijing have also become strained, given a new US strategy in the Asia-Pacific region to contain China. During Secretary of Defense Chuck Hagel’s recent visit to Beijing, his Chinese counterpart Chang Wanquan said that efforts to contain China would never succeed.

In remarks to Obama's statement, Pushkov said by calling Russia a “regional power,” the US leader showed “the depth of his despair over the growing international role of Russia from Siberia to Ukraine.”

The fate of Crimea, formerly an autonomous republic within Ukraine and part of Russia since last month, has triggered the most serious geopolitical showdown between Moscow and the West since the end of the Cold War.

Obama has claimed the Russian population in Crimea was never under threat from the growing influence of ultranationalists on Ukraine’s political life, as Russia had repeatedly warned, and denounced Moscow’s move to protect its compatriots.

During a question and answer session with the public last week, Russian President Vladimir Putin said that trust between Russia and the United States had been lost to a great extent, but not due to Moscow. Restoring the trust between Russia and the US requires the elimination of all approaches based on double standards, the Russian president said.