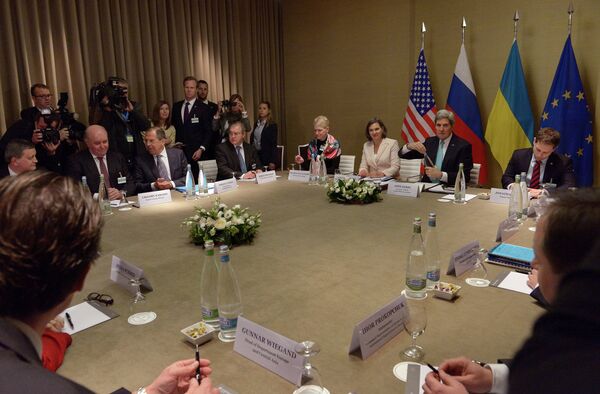 “In the so-called Geneva deal, where are the demands for accountability on Washington and the European Union? The poachers have been reinvented as the gamekeepers,” Cunningham said.

The four-party meeting was attended by top diplomats from Russia, the US, the EU and Ukraine’s interim government. During the seven-hours talks in Geneva the sides tried to find a solution to the crisis in Ukraine.

“The communique adopted today has a provision calling on the immediate start of a broad national dialogue in the context of a constitutional reform so that all regions could voice their wishes,” Russian Foreign Minister Sergei Lavrov said, commenting on the results of the meeting. “It's up to Kiev authorities now to ensure an all-inclusive, transparent and accountable constitutional process,” he added.

“US-led NATO continues to build up military forces in the Baltic, Eastern Europe, the east Mediterranean and the Black Sea,” Cunningham believes. “This Geneva arrangement is not a genuine address to the problem. It obfuscates the real cause of the problem and in my view will only lead to more confrontation, not less,” he added.

“On the surface, it’s a welcome development to see the US, EU, Russia, and Ukraine’s 'governing authorities' reach an agreement on the disarmament of armed groups, the freeing of occupied buildings all across the country, and amnesty for the non-violent protesters,” said Andrew Korybko, a Moscow-based foreign affairs commentator.

“In reality, even though the governing entity in Kiev and Moscow have a shared interest in disarming Right Sector, how likely is it that this will succeed, and will Kiev, if need be, send its armed forces to do this?” he added.

Following the conclusion of the talks, US President Barack Obama announced his administration was prepared to impose further sanctions against Russia if the agreement reached in Geneva fails to materialize.

“Obama continues to use threatening and provocative language calling for further sanctions on Russia if the latter does not comply with irrational Western demands on Moscow to de-escalate a crisis that Washington has engendered in Ukraine,” Finian Cunningham said.

Kiev has no plans of halting special operations in eastern Ukraine and their intensity will depend on how the Geneva agreements are being fulfilled, including vacating occupied administrative buildings and laying down arms, acting Ukrainian Foreign Minister Andrii Deshchitsia said on Friday.