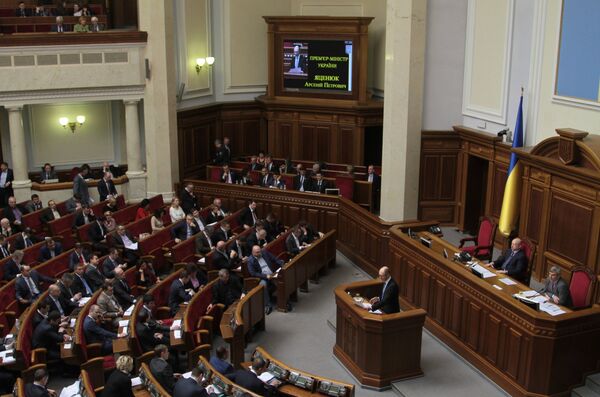 The document defines the “temporarily occupied territory” as the area of Crimea and Sevastopol, as well as their airspace and territorial waters, including the seabed and its resources.

The legislation was passed by 228 votes, two more than the minimum required to send it to Ukraine's parliamentary speaker and interim President Olexander Turchynov to be signed into law.

The law will come into force after it is published in the newspaper of record.

The lawmakers refused to support criminal punishment for so-called collaborationism, a key demand by radicals, defined as “deliberate cooperation in any form with the occupied state or its representatives in violation of Ukrainian state interests.”

The legislation says the “temporarily occupied territory” is an integral part of Ukraine and subject to Ukrainian laws, while assigning responsibility for violations of human rights there to Russia.

The lawmakers also said that Moscow should pay compensation for all material damage caused by absorbing Crimea into Russia. The legislation proposes adding a punishment of up to three years in jail to the Ukrainian criminal code for violating the entry rules to the territory.

The republic of Crimea and the city of Sevastopol, which has a special status within the region, were added as the 84th and 85th federal subjects of the Russian Federation after President Vladimir Putin signed a decree finalizing the reunification last month.

Crimea, a predominantly ethnic Russian region, rejected the legitimacy of the new self-proclaimed Western-backed government, and moved to rejoin Russia after the government in Kiev introduced measures aimed against Russian-speakers in the country.

Moscow has described the uprising in Kiev as an illegitimate fascist coup and a military seizure of power, which resulted in it taking steps to protect ethnic Russians in Ukraine.