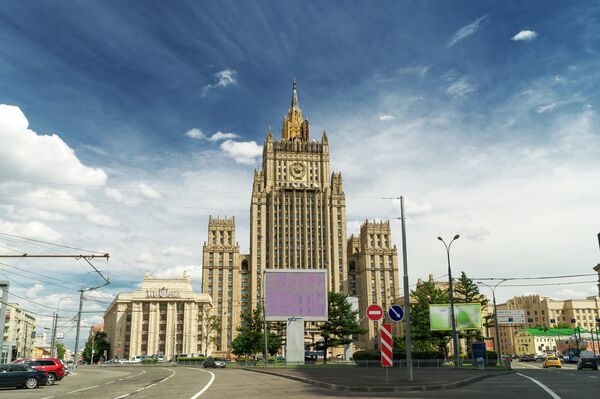 Recent statements by NATO Secretary General Anders Fogh Rasmussen on the situation in Ukraine as well as the alliance’s double standard on Crimea have hindered a de-escalation of tensions in the country, the Russian Foreign Ministry said Thursday.

MOSCOW, April 10 (RIA Novosti) – Recent statements by NATO Secretary General Anders Fogh Rasmussen on the situation in Ukraine as well as the alliance’s double standard on Crimea have hindered a de-escalation of tensions in the country, the Russian Foreign Ministry said Thursday.

“Several times over the last few months we have heard nothing constructive in comments by the NATO Secretary General,” the ministry said in a statement.

"The use of double standards is a direct threat to security and stability in the region,” the statement said, referring to NATO members' support of the coup-imposed regime in Kiev while calling the reunification referendum in Crimea illegitimate.

Earlier this week, the NATO chief voiced concerns about the situation in eastern Ukraine during a conference of the Atlantic alliance in Paris, stressing that Russia’s decision to intervene in Ukraine will turn into a historic mistake and might lead to the country’s international isolation.

“Events in eastern Ukraine are a great concern, I urge Russia to step back. Any further move to eastern Ukraine would represent a serious escalation rather than de-escalation,” Rasmussen said.

The Russian Foreign Ministry said that NATO is attempting to use the Ukrainian crisis as an imaginary threat to unite the alliance's members.

“The constant accusations by the Secretary General directed at us confirm the fact that the alliance is attempting to use the crisis in Ukraine in order to ‘unite ranks’ before an imaginary external threat to NATO member states in order to secure the need for the alliance in the 21st century,” the ministry said.

In February, the Ukrainian parliament backed by far-right movements ousted President Viktor Yanukovych, amended the constitution and scheduled an early presidential election for May 25.

Moscow has described the uprising in Kiev as an illegitimate fascist coup and a military seizure of power, which resulted in it taking steps to protect ethnic Russians in Ukraine, including the reunification of Crimea. It blames the ongoing crisis in the country on Ukrainian nationalists and their aggressive rhetoric.

Moscow has insisted that a federal form of government is the only way out of the protracted political stalemate in Ukraine, currently a unitary state which is de-facto split into a Ukrainian-speaking west and a Russian-speaking east and south.