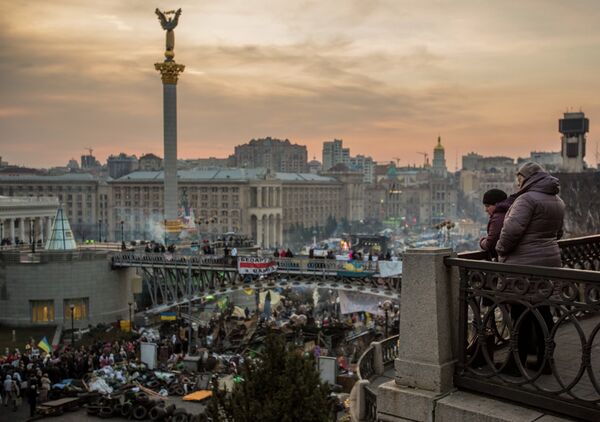 Russia does not recognize the legitimacy of Ukraine’s new authorities but continues its economic assistance to its crisis-hit neighbor, a situation that will not last forever, Russian President Vladimir Putin said Wednesday.

MOSCOW, April 9 (RIA Novosti) – Russia does not recognize the legitimacy of Ukraine’s new authorities but continues its economic assistance to its crisis-hit neighbor, a situation that will not last forever, Russian President Vladimir Putin said Wednesday.

“As you know, our partners in Europe recognize the legitimacy of the current Kiev authorities, but are doing nothing in order to support Ukraine; not a single dollar, not a single euro,” Putin said.

“The Russian Federation doesn’t recognize the legitimacy of the authorities in Kiev, but will continue to give it economic support and subsidize Ukraine’s economy with hundreds of millions and billions of dollars for now. This situation, of course, can’t continue eternally,” the Russian leader added.

He demanded that Russia remain disciplined and fulfill all contract obligations with Ukraine, but added that the country must be prepared to replace Ukrainian goods and correct state defense orders.

“I ask you to be disciplined and fulfill all contract obligations with our Ukrainian partners, but we need to be prepared for any development in the situation … including import replacements,” Putin said during a meeting of senior officials.

He added that Russia should be ready for a scenario when ties with Ukrainian defense companies are severed because of the ongoing political instability in Ukraine.

“If the need for additional resources arises, we will have to introduce certain amendments to defense procurement and our plans for defense industry development. I ask you to prepare your suggestions on the issue,” Putin said.

The president suggested the government and state-run gas giant Gazprom should refrain from taking measures in case Ukraine does not pay for gas and not demand advance payment for gas deliveries until after additional consultations.

“This falls directly within the contract, but taking into consideration the complex situation that Ukraine is presently in and the incompleteness of our negotiations with the European Union, I would ask the Russian government and Gazprom to refrain from [taking these measures] … until additional consultations are held, if, of course, our partners agree to these consultations. If not, then we will act according to the contract,” Putin said.

Russian Prime Minister Dmitry Medvedev said earlier in the day that Russia has reason to transfer to a prepayment scheme for gas deliveries to Ukraine.

After Ukrainian President Viktor Yanukovych’s ouster and subsequent reunification of Crimea with Russia, Gazprom cancelled two major gas discounts for Ukraine, raising the price from $268 to $485 per thousand cubic meters starting from April 1.

Ukrainian Energy Minister Yuriy Prodan said on Tuesday that Russia’s price on gas for Ukraine is unfairly high and warned that Russian gas transit to Europe was under threat.