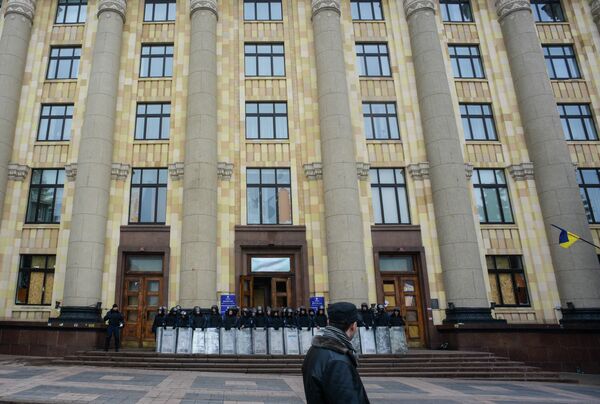 Several dozen masked officers dressed in black and bearing no identifying insignia have blocked the central entrance of the building. They are armed with Kalashnikov assault rifles. Hundreds of local police have also cordoned off the entrance, some of them wearing army helmets.

Local rioters occupying the building were driven out Monday night, and by Tuesday morning a local police officer said no protestors remain inside the building, which has broken windows and a smashed door.

Car tires have been piled up in front of the entrance together with other trash.

A local motorist told RIA Novosti that traffic is blocked around the building and through the city’s Svoboda Square, but cars are moving freely around the rest of town. Residents have added that the University metro station remains closed.

Ukrainian media reported late Monday that protesters in Kharkiv have voiced plans similar to those in the Donetsk region in eastern Ukraine, who earlier announced they will schedule a referendum in the region by mid-May on declaring independence and joining Russia, although no formal measures have been taken so far.

Moscow has insisted that a federal form of government is the only way out of the protracted political crisis in Ukraine, currently a unitary state which is de-facto split into a Ukrainian-speaking west and a Russian-speaking east and south.