Russia Ready for Ukraine Talks with US, EU – Lavrov 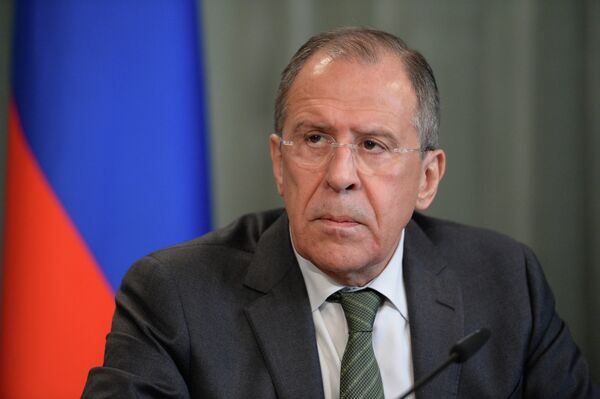 © RIA Novosti . Sergey Kuznecov
/
Go to the photo bank
Subscribe
Moscow is prepared to consider multilateral negotiations on the situation in Ukraine involving the US and EU, but a date has not yet been agreed on for the talks, Russian Foreign Minister Sergei Lavrov said Tuesday.

MOSCOW, April 8 (RIA Novosti) – Moscow is prepared to consider multilateral negotiations on the situation in Ukraine involving the US and EU, but a date has not yet been agreed on for the talks, Russian Foreign Minister Sergei Lavrov said Tuesday.

US Secretary of State John Kerry proposed holding talks on the crisis-hit country within the next 10 days in a telephone conversation with Lavrov on Monday, State Department spokeswoman Jen Psaki said.

“It’s true, we are ready to consider a multi-party format with representatives from Europe, the United States, Russia and Ukraine,” Lavrov said during a joint press conference in Moscow with his Angolan counterpart, Georges Rebelo Chicoti.

Lavrov added however that the sides have not yet discussed any specific date. “We need to understand the format and agenda of this meeting,” the Russian foreign minister said.

The initiative comes after demonstrators demanding broader autonomy in the country seized local government buildings over the weekend in the southeastern Ukrainian cities of Donetsk, Kharkiv and Lugansk.

Lavrov urged the US to avoid shifting the blame onto Moscow for the ongoing political turmoil in the country.

A recent statement by White House Press Secretary Jay Carney that some riots in southern Ukraine were staged by outsiders sounded “as if he rolled the calendar back five months and was describing what happened on Maidan [Square] in downtown Kiev,” Lavrov said.

He said the southern and eastern Ukrainian regions should take part in the talks, adding that ignoring their concerns would rule out the talks being productive.

“We want the south and east of Ukraine to be represented at such events,” Lavrov said, adding that the new authorities in Kiev have so far made no positive gestures towards the regions, where residents say their interests are being ignored.

Officials in Kiev earlier proposed an abolition of the law allowing the country's regions to make Russian a second official language, and have denied the need of federalization.

“All these signals amid the lack of simple respect for the south and east of Ukraine were perceived in these parts of the country as an attempt to ignore their legitimate interests,” Lavrov said, adding that the refusal to negotiate was considered in these regions as a signal to act to protect their rights.

Moscow wants the draft of a new Ukraine constitution to be presented before the upcoming talks, Lavrov said. Ukraine's acting Prime Minister Arseniy Yatsenyuk had earlier promised to complete the work on the draft by April 15.

The foreign minister warned against convening the multilateral talks in an effort to legitimize the draft constitution, which will likely be contested in the regions that have not recognized the legitimacy of the government in Kiev.

"Is it planned to convene the multi-party meeting when the constitution project is already presented to the Ukrainian parliament ... so that we, basically, just show up and legitimize the draft constitution, which no one has seen yet?” Lavrov asked.

The minister called for the drafting process to be carried out transparently, as agreed at talks with Kerry in Paris last month, adding that neither Ukraine nor the United States has informed Moscow about the preparations of a new Ukrainian constitution.

“There has been no information on what exactly is being discussed, of what kinds of concrete conceptions are being laid out in this basic law of Ukraine,” Lavrov said.

Moscow has attempted to receive explanations from acting Ukrainian Foreign Minister Andriy Deschytsia and Kerry, since the United States is included in preparing the new Ukrainian constitution, but has received no clear response, Lavrov said.