Police Has No Plans to Storm Donetsk Regional Administration Building 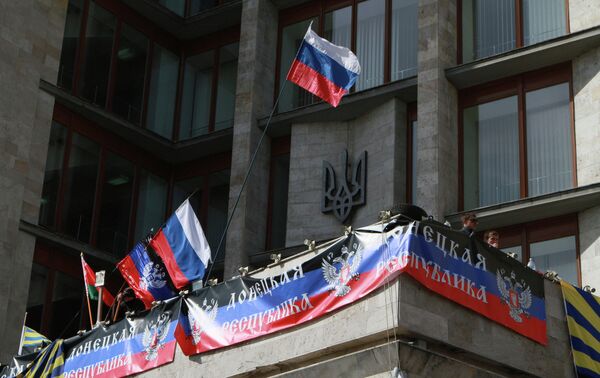 © RIA Novosti . Irina Gorbaseva
/
Go to the photo bank
Subscribe
Ukrainian Deputy Prime Minister Vitaly Yarema said Tuesday the country's police will not storm the building of the regional administration in Donetsk, eastern Ukraine, seized by protesters since the weekend, the UNIAN news agency has reported.

After talks, protesters pushing for broader regional autonomy in Ukraine, agreed to ground arms and leave the building. Yarema told Hromadske TV that the crisis in the country could be resolved only by peaceful means and authorities want no bloodshed in the country.

“We should enter talks with protesters and should not forcibly disperse them, as they will return,” Yarema told the activists.

The negotiations were mediated by Ukraine’s richest businessman, Rinat Akhmetov, who called on protesters at night to hold talks at the operations center to prevent the storming of the building.

Late on Monday, the building of the national security service in Donetsk was cleared from protesters in an operation, conducted by Ukraine’s special forces, said Viktoria Syumar, a deputy head of Ukraine's Security and Defense Council, citing Ukraine's acting president, Oleksander Turchinov.

Ukraine’s interim authorities vowed tough “anti-separatism measures” in eastern and southern regions with substantial ethnic Russian communities, which rallied that in support of greater autonomy over the weekend.

The Donetsk region in eastern Ukraine announced plans Monday to schedule a referendum by mid-May on declaring independence and joining Russia. Ukrainian media said similar intentions were voiced by protesters in Kharkiv late on Monday, although no formal measures have been taken so far.

Moscow said that a federal form of government is the only way out of the protracted political crisis in Ukraine, currently a unitary state which is de-facto split into a Ukrainian-speaking west and Russian-speaking east and south.