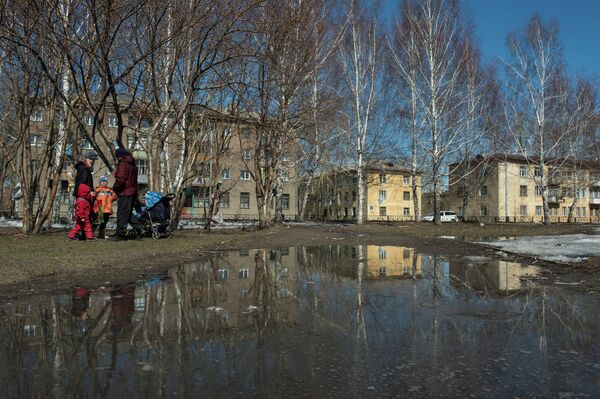 "It was the hottest April 1 on record for several western Siberian cities, including Novosibirsk, Tomsk, Kemerovo, Barnaul and Gorno-Altaysk," Renad Yagudin said.

"The average temperature in Russia has increased 0.4 degrees every ten years. Overall, the temperature in the area is 6.5-16.2 degrees Fahrenheit (2-9 Celsius) higher than the record set in 1989," he added.

Wednesday was also expected to be a record-breaking day for western Siberia.

According to Aleksander Frolov, the head of Russia's Agency on Hydrometeorology and Environmental Monitoring, global warming will have a greater impact on Russia than any other region in the world.

Some parts of Russia have shown even more extreme warming. In the Arctic, south Chukotka and Kamchatka regions temperatures have risen 150 to 200 percent more than in the rest of the country.

In October last year, Norwegian and Russian scientists said that surface water in the Barents Sea was 5 degrees Celsius warmer than normal. They linked the peak-temperatures with the unusually warm summer in the northernmost parts of mainland Norway and on Russia's northern Kola Peninsula.

The Intergovernmental Panel on Climate Change said in a report in September it was "extremely likely" that warming since the 1950s has been man-made, adopting its strongest language yet on the state of the world's climate system. In its previous assessment in 2007 the UN panel said it was "very likely" that humans caused global warming.

The IPCC report projected a sea level rise by 2100 of 26-82 centimeters, up from the 18-59 centimeter rise it predicted six years ago. The report also projected that average temperatures will rise 0.3 to 4.8 degrees Celsius by the end of the century.

The Fifth IPCC assessment report is now underway. The latest document released says the effects of warming are being felt everywhere, fuelling potential food shortages, natural disasters and raising the risk of wars.