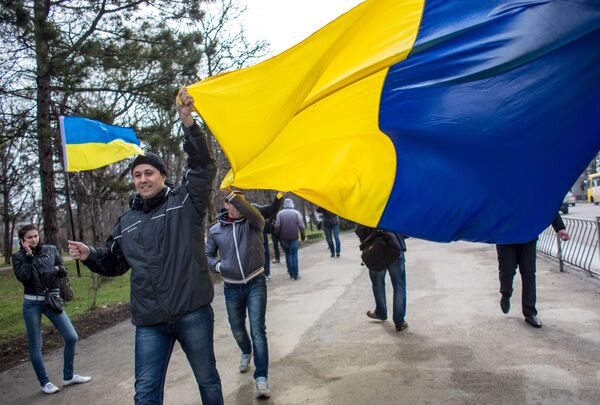 © RIA Novosti . Andrey Stenin
/
Go to the mediabank
Subscribe
International
India
Africa
Ukrainians want their democratic rights respected, but democracy has no chance of emerging after the upcoming presidential election is held in May, said Stephen Lendman, a Chicago-based radio host and author.

MOSCOW, March 31 (RIA Novosti), Daria Chernyshova - Ukrainians want their democratic rights respected, but democracy has no chance of emerging after the upcoming presidential election is held in May, said Stephen Lendman, a Chicago-based radio host and author.

"People demand the same referendum right the Crimeans got. They want local autonomy within a Ukrainian federation. They want their rights respected. Washington and Kiev putschists reject these ideas," Lendman told RIA Novosti.

Lendman believes the upcoming May election promises to be a sham and the political system is not likely to become democratic, adding that the country is much more likely to split along east-west lines or fall into a civil war.

A recent report by Russia's Institute for Globalization and Social Movements (IGSO) said the presidential election in Ukraine could increase separatist tendencies in the country's eastern and southern regions, adding the country might split after the May 25 election.

According to IGSO, ongoing calls for greater autonomy reveal deep socioeconomic contradictions within the country - between the underdeveloped and subsidized West and the industrially progressive Southeast. The nationalistic coup, the institute says, has forced a wedge between the country's divided halves.

"An association of Ukraine with the EU threatens real losses, first of all to the economically strongest regions," said Boris Kagarlitsy, IGSO's Director.

"The new authorities are not trustworthy due to their initiatives and their willingness to obey the IMF while ruining Ukraine's economy. Twenty-three years of poverty and deterioration just add to the situation," he added.

The Ukrainian parliament voted to hold early presidential elections May 25, after impeaching Viktor Yanukovych and removing him as president.

The deadline for entering the race has already passed, with twenty-four candidates announcing their intent to run and seven already registered by election officials.

The Central Election Commission has yet to consider the application of former Prime Minister Yulia Tymoshenko, the leader of the Batkivschyna party.

Vitali Klitschko, head of the Udar Party, pulled out of the race last week in favor of Petro Poroshenko, a businessman who is leading in the polls. Klitschko said he would run for mayor of Kiev instead.

Ukraine's ousted President Viktor Yanukovych has refused to run in the upcoming elections, calling them illegitimate.