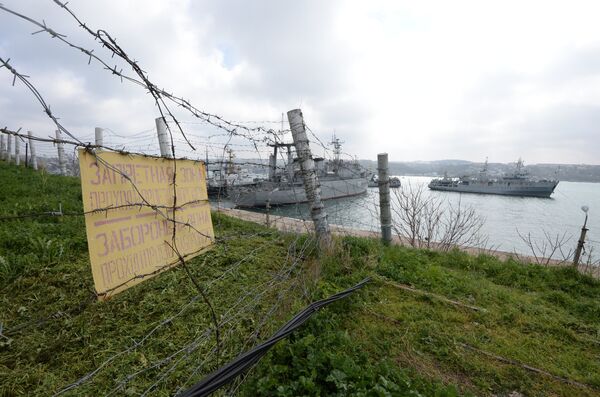 Moscow is prepared to resolve property disputes with Ukraine surrounding the termination of bilateral agreements on the basing of the Black Sea Fleet, Russian Deputy Foreign Minister Grigory Karasin said on Monday.

The lower chamber of the Russian parliament, the State Duma, voted on Monday to terminate several agreements on the lease of the Russian Black Sea fleet base in Crimea, since the region became Russian territory earlier this month.

"We do not exclude that in regard to Russia's unilateral termination of these agreements, that there most likely will be legal, financial, property and other issues that will have to be negotiated with Ukraine," Karasin said during his speech in the country's lower house of parliament.

"We are ready to discuss these issues with the government of Ukraine, which we hope will be formed democratically and constitutionally, and will represent the entire population of Ukraine, to give respect and abide by fundamental human rights not only in words, but in action, including the rights of the Russian-speaking residents of Ukraine," he continued.

The measures to be scrapped include a 1997 agreement on the conditions of the fleet's stay in Crimea, which was extended by 25 years in a 2010 deal by Ukrainian President Viktor Yanukovych.

In exchange, Ukraine received a discount of $100 on each 1,000 cubic meters of natural gas imported from Russia, which was provided for by cutting export duties on the gas, money that would have gone into the Russian state budget.

The Kremlin said earlier this month that as the base is no longer located in Ukraine, there were no legal grounds for the discount to be continued.