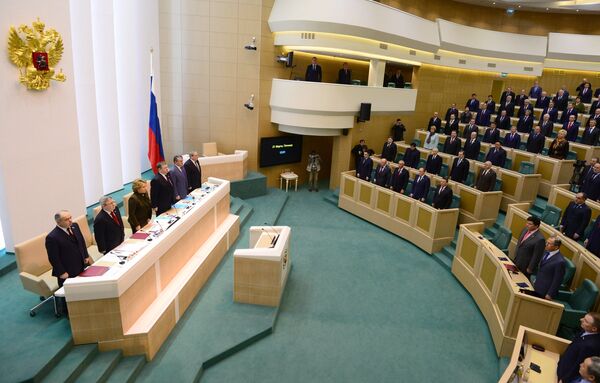 Russia’s upper house of parliament on Friday ratified the treaty providing for the reunification of the Crimean Peninsula with Russia.

MOSCOW, (March 21, RIA Novosti) – Russia’s upper house of parliament on Friday ratified the treaty providing for the reunification of the Crimean Peninsula with Russia.

The vote came a day after the country’s lower house, the State Duma, gave its approval.

The Federation Council passed the initiative with 155 of 166 senators voting in favor of Crimea and the city of Sevastopol, which has a special status within the region, being reunited with Russia.

Russian Foreign Minister Sergei Lavrov said Thursday the legal process providing for the reunification of the Black Sea peninsula with Russia after 60 years as part of Ukraine would be completed by the end of the week.

On Sunday, a referendum on the status of Crimea saw over 96 percent of voters in the region back the motion to leave Ukraine and rejoin Russia.

Russian President Vladimir Putin along with Crimean Prime Minister Sergei Aksyonov and other leaders of the region signed an agreement Tuesday in the Kremlin stating the Republic of Crimea was now to be considered Russian territory.