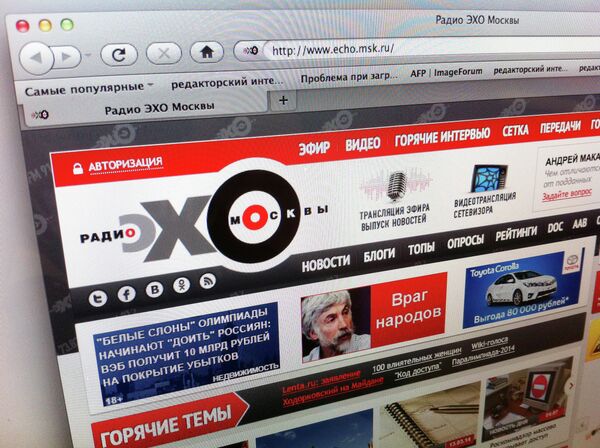 Russian radio station Ekho Moskvy said Friday it has blocked access to a blog written for its website by anti-Kremlin activist Alexei Navalny on orders from Russian prosecutors, hours after the state telecom watchdog blacklisted the opposition figure’s LiveJournal blog.

The Prosecutor General’s Office ordered Ekho Moskvy to restrict access to Navalny’s blogs “in connection with identified signs of extremist activity,” the radio station’s chief editor Alexei Venediktov said in a statement. Prosecutors ordered the providers hosting Ekho Moskvy’s site to close down access to it within 24 hours if the radio station failed to comply, he said.

Venediktov said Ekho Moskvy would ask officials to clarify which of Navalny’s statements were extremist “so that other materials not of an extremist nature may be available to users.”

On Thursday, telecom watchdog Roscomnadzor blacklisted Navalny’s LiveJournal blog and several other independent websites, including Grani.ru, opposition site Kasparov.ru and online newspaper Yezhednevny Zhurnal, for “inciting users to engage in unlawful activities and take part in mass rallies that are in breach of the law.”

Navalny, who played a leading role in mass street protests against President Vladimir Putin in the winter of 2011-12, is currently under house arrest and is being investigated for embezzlement in a case he claims was fabricated in retribution for his opposition activities.

The internet injunctions come on the heels of a series of other crackdowns on media freedom that critics have condemned as a harbinger of the death of long-suffering independent journalism in Russia.

The editor of Russian independent news site Lenta.ru was fired and replaced with a Kremlin-friendly journalist this week after publishing an interview with a leading member of a controversial Ukrainian nationalist group. Her replacement prompted 39 members of the site’s staff to quit in protest, calling the dismissal "a violation of the media law which says censorship is inadmissable" in an open letter addressed to the site's readers.

Multiple other media outlets have recently undergone major leadership changes or restructuring in what analysts say is a result of increasing pressure from the Kremlin.

A former deputy head of a pro-Kremlin radio station was appointed the chief executive of opposition-leaning Ekho Moskvy in February, while independent TV channel Dozhd may soon shut down – despite last-ditch fundraising efforts – after being dropped by Russia’s major cable providers earlier this year.

Putin also unexpectedly liquidated state news agency RIA Novosti in December, ordering it to be replaced with a new agency named Rossiya Segodnya (Russia Today) headed by controversial anti-Western TV pundit Dmitry Kiselyov. The liquidation process is due to be completed by early May.