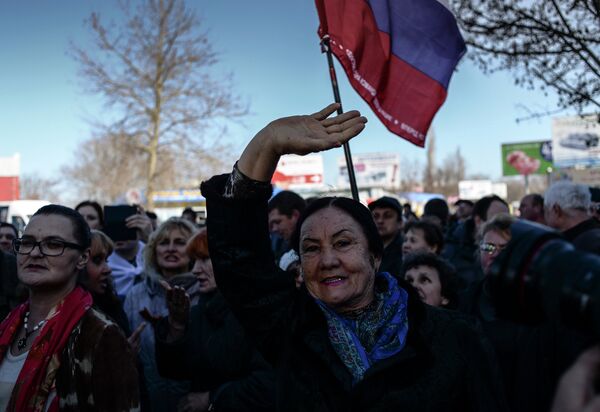 Ukraine’s Crimean city of Sevastopol has voted to become part of Russia, mirroring an earlier vote by the region’s parliament and consolidating support for the majority ethnic Russian region to formally secede from Ukraine in an upcoming popular vote.

MOSCOW, March 7 (RIA Novosti) – Ukraine’s Crimean city of Sevastopol has voted to become part of Russia, mirroring an earlier vote by the region’s parliament and consolidating support for the majority ethnic Russian region to formally secede from Ukraine in an upcoming popular vote.

The Sevastopol city council voted “to join the Russian Federation as a subject,” the council said in a statement Thursday evening.

The city, which has a separate administrative status from the rest of Crimea, will still take part in a public referendum to formalize the decision, scheduled by the Crimean parliament for March 16.

The referendum will offer voters two choices: to either approve the secession or for the primarily Russian-speaking peninsula to remain an autonomous republic within Ukraine.

Crimea’s surprise vote on secession, while lacking any immediate practical effect, deepened the ongoing political crisis in the region after thousands of troops – apparently under Russian command, but lacking official insignia – took control of Ukrainian military bases across Crimea in the past week.

The acting president of Ukraine, Oleksandr Turchynov, dismissed the referendum plan, calling it “a farce” and “a crime against the state,” and claiming in a televised address Thursday evening that the Ukrainian parliament would move to dissolve the Crimean one.

US President Barack Obama denounced Crimea's move as illegal under the Ukrainian constitution and international law, and ordered financial and visa sanctions for those responsible for the vote, which he said threatened the territorial integrity of Ukraine.

US allies in the European Union swiftly followed with a matching set of visa sanctions, threatening further measures if the crisis could not be defused.

Obama and Russian President Vladimir Putin spoke for an hour by phone about the situation on Thursday evening, according to statements by both governments.

On the Russian side, the conversation “revealed differences in approaches and assessments of the causes of the current crisis,” the Kremlin said.

Putin said in the call that Ukraine’s current government was illegitimate, and that “Russia cannot ignore [Crimea’s] appeals for help in this regard,” but that it would act in full compliance with international law.

Russian and Crimean officials have refused to recognize the new central government in Kiev, which ousted President Viktor Yanukovych on February 22.

Obama proposed a diplomatic strategy under which international monitors would be introduced to stabilize Crimea, the Russian military would withdraw from the region and direct talks would take place between the Ukrainian and Russian governments, according to a statement by the White House.

The presidents agreed for Russian Foreign Minister Sergei Lavrov and US Secretary of State John Kerry to continue talks on the situation.