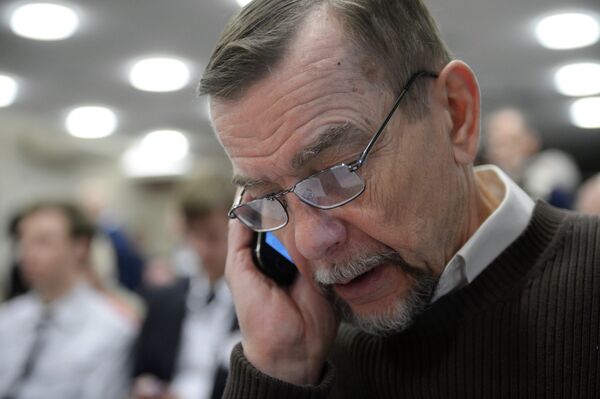 Lev Ponomaryov, who heads the NGO, said that “suspension of the organization’s activities,” a phrase in the Justice Ministry’s ruling, does not mean that For Human Rights will have to completely close down.

The only legal restriction de-facto imposed on the NGO is a ban on organizing rallies and demonstrations.

Ponomaryov said Justice Ministry inspectors pointed at some minor irregularities in the organization’s papers, including its charter.

“We explained that we are surely ready to make the corrections they want. But the charter can be amended only during the [organization’s] congress, held every three years. The last congress was in fall 2012,” he said.

“We have a normal dialogue with the Justice Ministry, and I’m not sure they’re acting on someone’s orders. I think we’ll be able to find common ground.”

For Human Rights was one of hundreds of NGOs that came under increased government scrutiny following a controversial law that took effect in Russia in November 2012.

The law obliged NGOs funded from abroad and engaged in “political” activities to register as “foreign agents.” Critics say the term is synonymous with "spy."

Ponomaryov said the temporary shutdown has nothing to do with the controversial law.

“That’s an awful lie. Not a single official paper designates us like that,” Novaya Gazeta quoted Ponomaryov as saying.

The NGO was forcibly evicted from its original Moscow office in June 2013, after the authorities claimed its lease had expired, in an overnight operation by private security guards with the attendance of the police.

In September, the Moscow authorities donated the organization an office free of charge for 49 years.