RIA Novosti Revamp Under Way as Liquidation Kicks In 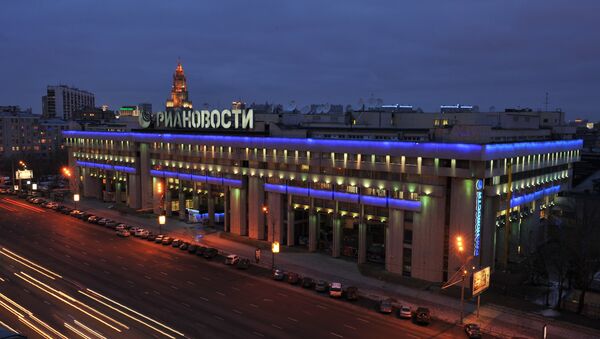 © RIA Novosti . Ramil Sitdikov
/
Go to the photo bank
Subscribe
Three months after a surprise Kremlin announcement that Russian state news agency RIA Novosti was to be liquidated, changes are under way at the company.

MOSCOW, March 6 (RIA Novosti) – Three months after a surprise Kremlin announcement that Russian state news agency RIA Novosti was to be liquidated, changes are under way at the company.

As employees were asked to choose whether to stay on at RIA Novosti’s replacement agency or sign redundancy contracts, the agency’s editor-in-chief Iraklii Gachechiladze said Thursday that staffing procedures for the new company were almost complete and that its final structure could be unveiled next week.

Employees up to and including the agency’s editor-in-chief were stunned on December 9 by a presidential decree liquidating RIA Novosti, Russia’s largest state-run news agency. Under the decree, RIA and state radio Voice of Russia are to be disbanded and their remaining structures merged into a replacement organization named Rossiya Segodnya, which is Russian for “Russia Today.”

News and commentary website Slon.ru ran a story Wednesday quoting a letter sent to employees of RIA Novosti’s regional offices in which the department’s head described the situation as “a rather bleak picture.”

The letter said the number of regional correspondents would be slashed, while those remaining will work from home, the report said.

“Even respected publications such as Slon.ru aren’t trying to reach RIA’s press service before publishing materials,” said Gachechiladze. “All the reforms are taking place with as much transparency as possible, therefore there is no need to rely on different interpretations of the events taking place.”

Even rank-and-file employees within the company have been left largely in the dark about plans for Rossiya Segodnya and about the specifics of its future editorial policy since the RIA Novosti liquidation news was announced, however.

The decision to abolish RIA Novosti was widely interpreted as another in a series of shifts in Russia’s news landscape pointing toward a tightening of state control in the already heavily regulated media sector.

On Wednesday, Izvestia daily newspaper reported that a ruling United Russia party deputy is readying legislation that would, among other things, make it a crime to “allow publication of false anti-Russian information.”

Starting Wednesday, staff at RIA Novosti’s Moscow-based English-language desk was asked to decide whether they wanted to work at Rossiya Segodnya or accept compensation packages. The bulk of the writers and editors for the English-language service have opted for the latter option.

The new agency is to be headed by Dmitry Kiselyov, a notoriously outspoken conservative TV presenter, and will share its editor-in-chief, Margarita Simonyan, with the Kremlin-funded TV news channel RT.

RT, which was formerly known as Russia Today, has been at the center of controversy recently with two reporters at the channel “going rogue” to openly criticize Russia’s interventions in the southern Ukrainian province of Crimea in the past few days. Criticism of the Kremlin typically gets little to no attention on RT, while content devoted to negative aspects of life in Western countries makes up a substantial part of its broadcasts.

Kiselyov’s ascendancy appears to point to efforts by the Russian authorities to appeal more to ultra-conservative values, a trend best signaled by last year’s passage of a law banning the promotion of homosexual “propaganda” to minors.

In Kiselyov’s most notorious on-screen harangue, dating back to 2012, he suggested it would be advisable to “burn or bury the hearts of gays” who die in car crashes.