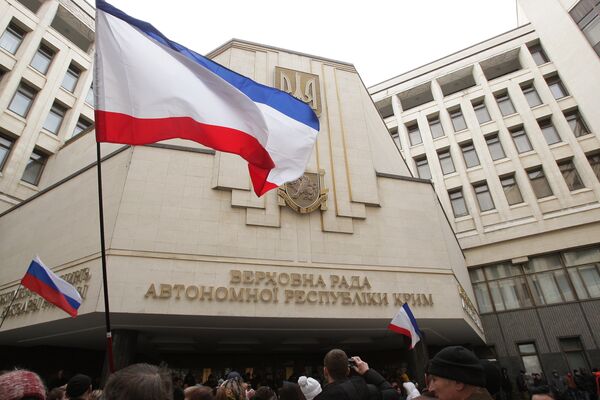 In the latest sign of the southern Ukrainian province of Crimea’s growing attempts to align with Russia, local lawmakers are considering changing the clocks to Moscow time.

SIMFEROPOL, March 3 (RIA Novosti) – In the latest sign of the southern Ukrainian province of Crimea’s growing attempts to align with Russia, local lawmakers are considering changing the clocks to Moscow time.

Crimean parliament speaker Volodymyr Konstantynov said Monday that he has ordered the creation of a working group to sound out local views before a decision is made about moving the clocks forward by two hours.

Calls for secession in the mainly ethnic Russian-populated peninsula have been mounting since an uprising in the capital, Kiev, last month precipitated the ouster of President Viktor Yanukovych, who leaned toward allying Ukraine with Moscow.

Local residents in Crimea have become alarmed at what they perceive as aggressively nationalist Ukrainian rhetoric coming out of Kiev in recent weeks and openly support suggestions that their autonomous republic merge with Russia.

The time-change proposal was put forward Monday by Crimea parliament deputy speaker Serhiy Tsekov, who suggested the move would be beneficial to people’s health.

“For many years we have been wondering why we live by a time that is strange to physiology,” Tsekov said.

The security situation remains in the balance in Crimea after Russia’s parliament Saturday approved a request by President Vladimir Putin to allow military action in Ukraine, in his words to defend Russian citizens and the Russian-speaking population.

While Putin has not formally ordered any deployments, there is mounting evidence that Russian troops have fanned out across the Crimean Peninsula.